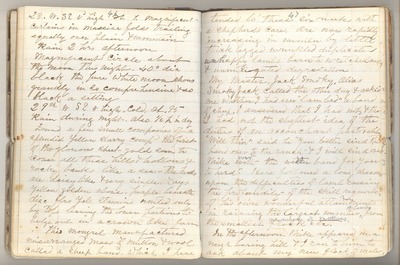 [Jan.] 28. W. S.E. V[ery] high. Clouds 1. magnificent curtains in massive folds trailing equally over plain and mountain. Rain 2 hrs. afternoon. Magnificent circle about the moon this night. 40⁰ dia[meter] black, the pure white moon shows grandly in so comprehensive and so black a setting. [Jan.] 29th. W. S.E. V[ery] high, cold. Clouds .95. Rain during night. Also ½ hour in day. Found a few small companies of a splendid yellow starry Comp., the first of the glorious sheet gold soon to cover all these hills and hollows and rocky banks like a sea – the heads are daisy-like and very simple, rays yellow golden above, purple beneath, disc. flowers yellow, stamins united only by tips leaving the lower portions to bulge out in a crown-like form. This mongrel, manufactured, misarranged mass of mutton and wool called a sheep band, which I have tended lo these six weeks with a shepherd’s care are now rapidly increasing in number by little thick-legged, wrinkled duplicates—unhappy lambs born to wretchedness and unmitigated degradation. My master, Jack Smoky, alias Smoky Jack, called the other day and asked me whether I had ever “lambed” a band of sheep. I answered that I had not, and that I had not the slightest idea of the duties of an accoucheur pastoralibus. “Well thin,” said he “you better sind this band over to the ranch, and I will sind over Mike wid the wedder band for you to herd.” Here followed a long discourse upon the difficulties of lamb raising, the profundity of the skill required, of his own wonderful attainments in raising the largest number of lambs from the smallest number of mothers, etc. In the afternoon Mike appeared on a neighboring hill and I ran to him to ask about my new flock of males –