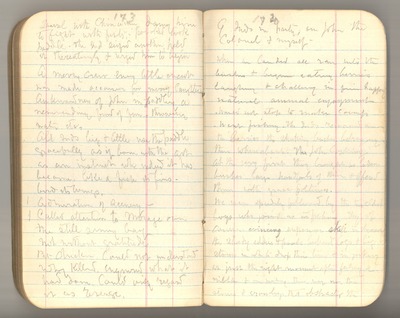 173 Quarrel with Chinaman daring him to fight with fists. [ ] took paddle. The Ind [Indian] seized another held it threatenly & urged him to begin A [merry] [crew] every little event was made [accusive] for merry laughter Awkwardness of John in paddling a neverending [find] of fun throwing water etc. All Inds [Indinas] big & little use the paddle gracefully as if born with the art as an instinct wh [which] indeed it has become like a fish its fins - bird its wings. Admiration of scenery. Called attention to mirage [over] the still sunny bay not without gratitude Pet chicken could not understand why killed inquired what it had done. Could only regard it as revenge.

174 9 Inds [Indians] in party [one] John the Colonel & myself. When we landed all ran into the bushes & began eating berries & laughing & [chattering] in [fine] happy natural animal enjoyment Would not stop to make camp went fishing. The Inds [Indians] [remained] among the berries [the] shaking bushes [betraying] their whereabouts. The John [Corkering] at the very first they brought us laden bushes large handfuls of them & offered them with grave politeness. We men speedily followed by the two eldest boys who joined us in fishing they of course evincing superior skill in [choosing] the shady eddies & pools behind logs & big stones in wh [which] to drop their lines & in jerking at just the right moment after feeling a nibble & in making their way over the stones & cross logs these obstructed the