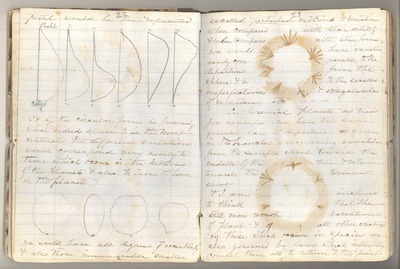 pistil would be thus represented. [Drawing of lines]. Or, if the circular form be preserved, which indeed appears to be the most natural, the different variations would correspond very nearly to those which occur in the motions of the planets and also to those of form in the planets. [Drawing]. We would have all degrees of eccentricity, and also those innumerable smaller so-called perturbed motions and variations when compared with star orbits; and when compared with star forms we would have variation easily comparable to the departures from the sphere to the so-called imperfections and irregularities of mountains, etc. In perennial plants, as trees, for example, we have this same general law of departure, as shown in the branches – increasing variation from the simple sheet towards the middle of the tree and return towards the terminal shoot, and I am inclined to think that the still more remote variations of plants and of all other creatures, viz. those which occur in species are governed by laws which inflexibly compel them all to return to the point