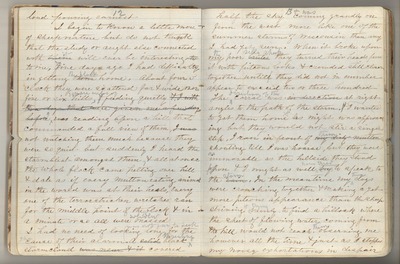 loud-pouring earnest. I began to know a little more of sheep nature, but do not think that the study or aught else connected with it will ever be interesting to me. Five days ago I had difficulty in getting the flock home. About four o’clock they were scattered far and wide over five or six square miles of hills, feeding quietly. I was reading on a hill that commanded a full view of them, not watching them much because they were so quiet, but suddenly I heard the storm-blest amongst them, and all at once the whole flock came pelting over hill and dale as if every mutton-eating animal in the world was at their heels. Every one of the terror-stricken wretches ran for the middle point of the flock and in a minute or so all were solidly massed. The cause of their alarm was not far to seek. A black threatening storm cloud covered half the sky and was coming grandly on from the west more like one of the summer storms of Wisconsin than any I had yet seen. When it broke upon the poor silly sheep they turned their heads from it with piteous looks and crowded still closer together until they did not in number appear to exceed two or three hundred. The direction of the corral was at right angles to the path of the storm. I wanted to get them home as night was approaching, but they would not stir a single step. I ran in front of them, shouting till I was hoarse, but they were as immovable as the hillside they stood on, and I might as well have tried to speak to the storm. In the meantime my two dogs were crouching together and making a yet more piteous appearance than the sheep, and trying vainly to find a hillock where the sheet of flowing water coming from the hill would not reach them, observing me, however, all the time. Just as I stopped my noisy exhortations in despair