September-October 1878, Notes of Travel on the East Side of the Sierra Image 3 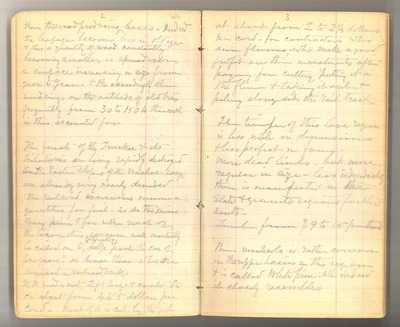 2 than the wood producing leaves. Indeed the leafage becomes less in old age & thus a quantity of wood constantly becoming smaller is spread over a surface increasing in size from year to year. & the exceedingly thin woodrings on the outside of old trees frequently from 30 to 150 to the [inch] is thus accounted for. The forests of the Truckee & its tributaries are being rapidly destroyed. [ ] The Eastern slopes of the Washoe range are already very nearly denuded. The railroad consumes immense quantities for fuel, so do the mines. Every pine & fir within reach of the locomotives scream will eventually be called on to literally "help push the car of progress”. or house those who are engaged in railroad work. RR wood is cut 2 ft long & costs the co about from 4 to 5 dollars per cord. Most of it is cut by the job 3 at about from 2 to 2 ¼ dollars per cord for contractors who own flumes who make a good profit on their investments after paying for cutting, putting it in the flumes & taking it out & piling along side the rail track The timber of this [lava] region is less noble in dimensions & less perfect in form.

more dead limbs but more regular in size, less individuality than is manifested in the [slate] & granite regions farther south. Lumber from $9 to 15 per [thousand] Pinus monticola is rather common in the upper basins in this region & is called White Pine — Wh [which] indeed it closely resembles.