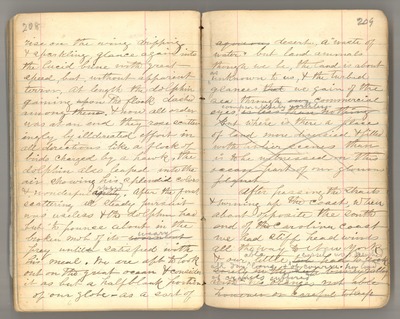 rise on the wing, dripping and sparkling, glance again into the lucid brine with great speed, but without apparent terror. At length the dolphin gaining on the flock dashed among them, and now all order was at end. They rose scatteringly by ill-directed effort in all directions like a flock of birds charged by a hawk. The dolphin also leaped into the air, showing his splendid colors and wonderful speed. After the first scattering all steady pursuit was useless and the dolphin had but to pounce about in the broken mob of its weary prey until satisfied with his meal. We are apt to look out on the great ocean and consider it as but a half-blank portion of our globe, as a sort of desert, a “waste of water”, but land animals though we be, the land is about as unknown to us, and the turbid balances we gain of the sea through commercial eyes comparatively worthless. But where is there a place of land more diversified and filled with livelier scenes than are to be witnessed on this ocean part of our glorious planet? After passing the straits and turning up the coast, when about opposite the south end of the Carolina coast we had stiff head winds all the way to New York, and our able little vessel was drenched all day long and of course her load of oranges suffered.