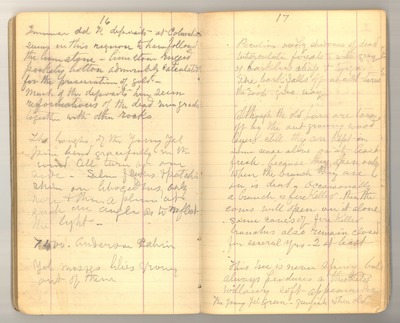 [Summer] dd R [dead River] deposits at Columbia seems in this region to have followed the limestone, limestone rugged pockety bottom admirably calculated for the preservation of gold. Much of the deposits here seem reformations of the dead river [gravels] together with other rocks

The boughs of the Young Yel [yellow] pine bend gracefully in the wind All turn on one side. Silver flakes & patches shine on librocedrus, only here & there a [plain] at such an angle as to reflect the light.

Yel [yellow] mosses & lilies growing out of them

Although the old burs are torn off by the outgrowing wood layers still they are kept in some sense alive or at least fresh, because they are open only when the branch they are on is dead. Occasionally a branch is fire killed. Then the cones will open on it alone Some cones of fire killed branches also remain closed for several yrs, 2 at least