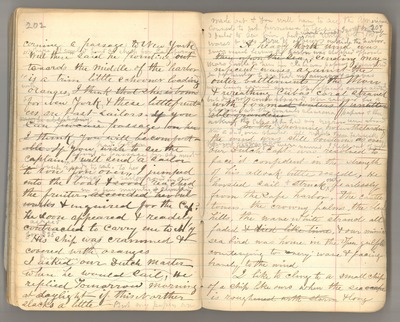 cerning a passage to New York where I could find a ship for California. “Well there,” said he, pointing toward the middle of the harbor, “is a trim little schooner loaded with oranges for New York, and these little fruiters are fast sailors. You had better see the Captain about a passage, for she must be about ready to sail. I will send a sailor to row you over.” I jumped into the dingy, a sailor rowed me over. I reached the fruiter in a few minutes and climbed [aboard] and inquired for the Capt. He soon appeared and readily agreed to carry me to N.Y. for $25. I asked our Dutch master when he would sail. “Tomorrow morning at daylight,” he replied, “if this Norther slacks a little. But my papers are made out, and you will have to see the American consul to get permission to leave.” I failed to see him, but went aboard next morning and hid until I felt the waves and was free of officers outside the harbor. Every vessel leaving the harbor was stopped opposite Morro Castle to have her clearance papers examined and in particular to see that no runaway slaves were being carried away. The officials came alongside, but did not come aboard; were satisfied by a glance at the consul’s clearance papers, and asing the Capt. If he had any negroes on board, “Not a d--d one,” he shouted. “All right then, farewell, pleasant voyage to you.” No passengers were named [and] I kept out of sight. A heavy north wind was sending magnificent waves against the outer battlements of the Morro and wreathing Cuba’s coral strand with foam. Notwithstanding the wind was still boisterous as ever our Dutch Capt. Was resolved to face it, confident in the strength of his all-oak little vessel. He hoisted sail and struck out fearlessly from the safe harbor. The castle towers, the crowny palms, the blue hills, the wave-white strand all faded and our mimic seabird was home in the open Gulf, courtseying to every wave and facing bravely to the wind. I like to cling to a small chip of a ship like ours when the sea is rough and long