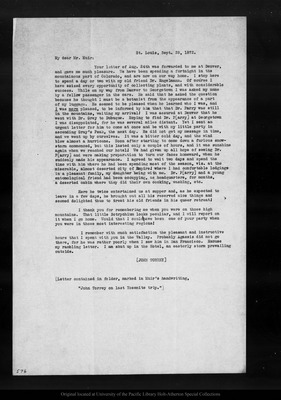 St. Louis, Sept. 28, 1872.My dear Mr. Muir:Your letter of Aug. 24th was forwarded to me at Denver, and gave me much pleasure. We have been spending a fortnight in the mountainous part of Colorado, and are now on our way home. I stop here to spend a day or two with my old friend Dr. Engelmann. Of course I have seized every opportunity of collecting plants, and with considerable success. While on my way from Denver to Georgetown I was asked my name by a fellow passenger in the cars. He said that he asked the question because he thought I must be a botanist from the appearance of a part of my luggage. He seemed to be pleased when he learned who I was, and I was more pleased, to be informed by him that that Dr. Parry was still in the mountains, waiting my arrival. I was assured at Denver that he went with Dr. Grey to Dubuque. Hoping to find Dr. P[arry] at Georgetown I was disappointed, for he was several miles distant. Yet I sent an urgent letter for him to come at once and be with my little party in ascending Gray's Peak, the next day. He did not get my message in time, and we went up by ourselves. It was a bitter cold day, and the wind blew almost a hurricane. Soon after starting to come down a furious snowstorm commenced, but this lasted only a couple of hours, and it was sunshine again when we reached our hotel ! We had given up all hope of seeing Dr. P[arry] and were making preparation to turn our faces homeward, when he suddenly made his appearance. I agreed to wait two days and spend the time with him where he had been spending most of the season, viz. at the miserable, almost deserted city of Empire! where I had comfortable lodgings in a pleasant family, my daughter being with me. Dr. P[arry] and a young entomological friend had been occupying, as headquarters, for months, a deserted cabin where they did their own cooking, washing, etc.Here he twice entertained us at supper and, as he expected to leave in a few days, he brought out all his reserved nice things and seemed delighted thus to treat his old friends in his queer retreat!I thank you for remembering me when you were on those high mountains. That little Botrychium looks peculiar, and I will report on it when I go home. Would that I could have been one of your party when you were in those most interesting regions!I remember with much satisfaction the pleasant and instructive hours that I spent with you in the Valley. Probably Agassiz did not go there, for he was rather poorly when I saw him in San Francisco. Excuse my rambling letter. I am shut up in the Hotel, an easterly storm prevailing outside.[JOHN TORREY][Letter contained in folder, marked in Muir's handwriting, "John Torrey on last Yosemite trip."]576