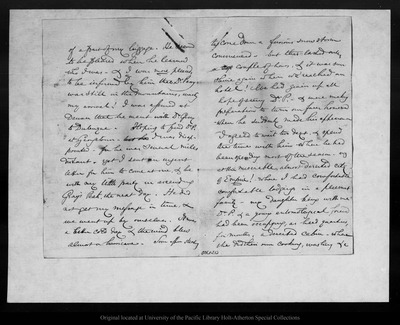 of a part of my luggage. He seemed to be pleased when he learned who I was - & I was [underlined: more] pleased, to be informed by him that Dr. Parry was still in the mountains, waiting my arrival! I was assured at Denver that he went with Dr. Gray to Dubuque. Hoping to find Dr. P. at Georgetown - I was disap- pointed - for he was several miles distant - yet I sent in urgent letter for him to come at once, & be with my little party in ascending Gray's Peak, the next day. He did not get my message in time, & we went up by ourselves. It was a bitter cold day & the wind blew almost a hurricane. Soon after startingto come down a furious snow storm commenced - but this lasted only a couple of hours, & it was sun shine again when we reached our hotel! We had given up all hope of seeing Dr. P. - & were making preparations to turn our faces homeward -when he suddenly made his appearance - I agreed to wait two days, & spend the time with him where he had been spending most of the season - viz at the miserable, almost deserted city of Empire! - where I had comfortable comfortable lodgings, in a pleasant family - my daughter being with me. Dr. P. & a young entomological friend had been occupying, as head quarters, for months, a deserted cabin - where the did their own cooking, washing &c00620