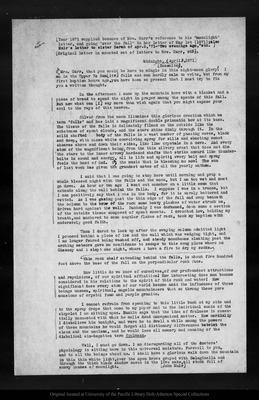 [Year 1871 supplied because of Mrs. Carr's reference to his "moonlight" letter, and going "over the fall" in her letter of May 1st (1871); also Muir's letter to sister Sarah of Apr.5, ‘71-"Two evenings ago," etc.][Original letter in mounted set of letters to Mrs. Carr, #63].Midnight, Yosemite, April 3, 1871Oh Mrs. Carr, that you could be here to mingle in this night-noon glory! I am in the Upper Yo Sem[ite] falls and can hardly calm to write, but from my first baptism hours ago, you have been so present that I must try to fix you a written thought.In the afternoon I came up the mountain here with a blanket and a piece of bread to spend the night in prayer among the spouts of this fall. But now what can [I] say more than wish again that you might expose your soul to the rays of this heaven.Silver from the moon illumines this glorious creation which we term 'falls' and has laid a magnificent double prismatic bow at its base. The tissue of the falls is delicately filmed on the outside like the substance of spent clouds, and the stars shine dimly through it. In the solid shafted body of the falls is a vast number of passing caves, black and deep, with close white convolving spray for sills and shooting comet sheaves above and down their sides, like lime crystals in a cave. And every atom of the magnificent being, from the thin silvery crest that does not dim the stars to the inner arrowy hardened shafts that strike onward like thunder-bolts in sound and energy, all is life and spirit; every bolt and spray feels the hand of God. Oh the music that is blessing me now! The sun of last week has given the grandest notes of all the yearly anthem.I said that I was going to stop here until morning and pray a whole blessed night with the falls and the moon, but I am too wet and must go down. An hour or two ago I went out somehow on a little seam that extends along the wall behind the falls. I suppose I was in a trance, but I can positively say that I was in the body, for it is sorely battered and wetted. As I was gazing past the thin edge of the fall and away beneath the column to the brow of the rock some heavy plashes of water struck me, driven hard against the wall. Suddenly I was darkened, down came a section of the outside tissue composed of spent comets. I crouched low, holding my breath, and anchored to some angular flakes of rook, took my baptism with moderately good faith.When I dared to look up after the swaying column admitted light I pounced behind a piece of ice and the wall which was wedging tight, and I no longer feared being washed off, and steady moonbeams slanting past the arching meteors gave me confidence to escape to this snug place where Mc Chesney and l slept one night, where l have a fire to dry my socks. This rock shelf extending behind the falls, is about five hundred feet above the base of the fall on the perpendicular rock face.How little do we know of ourselves, of our profoundest attractions and repulsions, of our spiritual affinities! How interesting does man become considered in his relations to the spirit of this rock and water! How significant does every atom of our world become amid the influences of those beings unseen, spiritual, angelic mountaineers that so throng these pure mansions of crystal foam and purple granite.I cannot refrain from speaking to this little bush at my side and to the spray drops that come to my paper and to the individual sands of the slopelet I am sitting upon. Ruskin says that the idea of foulness is essentially connected with what he calls dead unorganized matter. How cordially I disbelieve him tonight, and were he to dwell a while among the powers of these mountains he would forget all dictionary differences betwixt the clean and the unclean, and he would lose all memory and meaning of the diabolical sin-begotten term foulness.Well, I must go down. I am disregarding all of the doctors' physiology in sitting here in this universal moisture. Farewell to you, and to all the beings about us. I shall have a glorious walk down the mountain in this thin white light, over the open brows grayed with Selaginella and through the thick black shadow caves in the live oaks, all stuck full of snowy lances of moonlight.[John Muir]