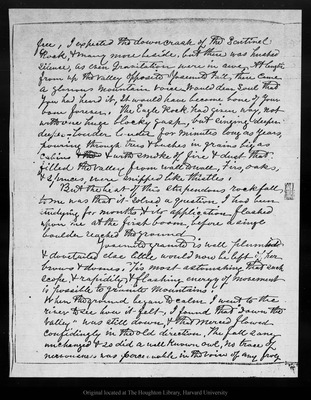 free. I expected the down crash of the Sentinel Rock, & many more beside, but there was hushed silence, as even Gravitation were in awe At length from up the valley opposite Yosemite Falls there came a glorious mountain voice. Would dear Soul that you had heard it, It would have become bone of your bone forever. The Eagle Rock had given way, not with one huge blocky gasp, but singing deeper deeper - louder louder for minutes long as years, pouring through trees & bushes in grains big as cabins & with smoke of fire & dust that filled the valley from wall to wall, Firs, oaks, & spruces were snipped like thistles. But the best of this stupendous rockfall to me was that it solved a question I had been studying for months, & its application flashed upon me at the first boom, before a single boulder reached the ground. Yosemite granite is well plum[illegible] & dovetailed else little would now be left of her brows & domes. 'Tis most astonishing that such scope, & rapidily, & flashing energy of movement is possible to granite mountains. When the ground began to calm I went to the river to see how it felt. I found that Down the Valley" was still down, & that Merced flowed confidingly in the old direction. The fall sang unchanged & so did a well known owl, no trace of nervousness was perceivable in the voice of any frog

John Muir National Historic Site. Please contact this institution directly to obtain copies of the images or permission to publish or use them beyond educational purposes.