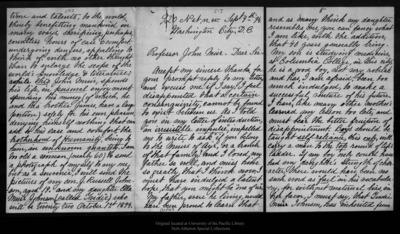 [4]time and talents, to the world, thereby benefitting mankind in many ways, sacrificing, perhaps, countless hours of ease & comfort, undergoing dangers, appalling to think of, with no other thought than to enlarge the scope of the world's knowledge & literature; while this John Muir, spends his life, in personal enjoyment spending his money (of which he and his brother James, have a large portion) solely for his own pleasure, denying himself nothing that can add to his ease and comfort, the brotherhood of Humanity, being to him, an unknown quantity. I am too old a woman, (nearly 60) to send a photograph of myself to any one, but as a souvenir, I will send the pictures of my son J. Russell Johnson, aged 19. and my daughter Ella Muir Johnson (called [Tudie?]) who will be twenty two October 1st 1894.[1]920 N st, n.w. Sept 9th 94Washington City, D. C.Professor John Muir. Dear Sir,Accept my sincere thanks for your prompt reply to my letter and excuse me if I say, I feel disappointed that a certain consanguinity, cannot be found to exist between us. As I told you in my letter of introduction, " an irresistible impulse" impelled me to write to ask "if you belong to the Muirs of Ayr, or a branch of that family? and I loved my father so well, and miss him so greatly, that I think now I must have indulged a latent hope, that you might be "one of us."My father, were he living, would have been proud to learn that018435and as many think my daughter resembles me, you can fancy what I am like, with the addition that 40 years generally bring.My son is studying medicine, at Columbia College, in this city, he is a good boy, not very robust, and has, I am afraid; been too much indulged, to make a successful venture of his future. I have, like many other mother's learned my lesson too late, and must bear the bitter fruition of disappointment. Boys should be taught self-reliance, this only, will carry a man to the top round of life's ladder. If my boy only could have had my daughter's strength of character, there would have been no such word as "fail" in his vocabulary, for without maternal bias, in her favor, I must say, that Tudie Muir Johnson, has inherited from