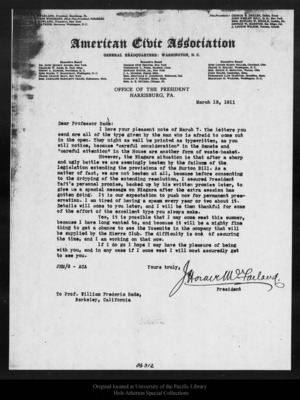 [Illegible]Horace MCFARLAND, President, Harrisburg, Pa.CLINTON ROGERS WOODRUFF, First Vice-President, PhiladelphiaWILLIAM B. HOWLAND, Treasurer, New YorkRICHARD B. WATROUS, Secretary, Washington, D. C.Vice-Presidents: GEORGE B. DEALEY, Dallas, TexasJOHN WESLEY HILL, D. D., New YorkMRS. EDWARD W. BIDDLE, Carlisle, Pa.GEORGE W. MARSTON, San Diego, Cal.J. LOCKIE WILSON, Toronto, CanadaAmerican Civic AssociationGENERAL HEADQUARTERS: WASHINGTON, D. C.Executive BoardDR. JOHN QUINCY ADAMS, New YorkCHARLES W. AMES, St. Paul, Minn.HENRY A. BARKER, Providence, R. I.MISS MABEL T. BOARDMAN, Washington, D. C.FRANK CHAPIN BRAY, New YorkMRS. CAROLINE BARTLETT CRANE, Kalamazoo, Mich.Executive BoardGEORGE OTIS DRAPER, New YorkFREDRICK L. FORD, Hartford, Conn.EDWARD HATCH, JR., New YorkJ. L. HUDSON, Detroit, Mich.MRS. MELVILLE F. JOHNSTON, Richmond, Ind.HARLAN P. KELSEY, Salem, Mass.MRS. A. E. MCCREA, Chicago, ’III.Executive BoardMISS LOUISE KLEIN MILLER, Cleveland, OhioFRANK D. MILLET, Washington, D. C.MRS. EDWIN F. MOULTON, Warren, OhioJOHN NOLEN, Cambridge, Mass.FREDERICK LAW OLMSTED, Brookline, Mass.BRAINARD H. WARNER, Washington, D. C.OFFICE OF THE PRESIDENTHARRISBURG, PA.March 30, 1911.Dear Professor Bade:I have your pleasant note of March 7. The letters you send are all of the type given by the man who is afraid to come out in the open. They might as well be printed as typewritten, as you will notice, because "careful consideration" in the Senate and "careful attention1" in the House are another form of waste-basket.However, the Niagara situation is that after a sharp and ugly battle we are seemingly beaten by the failure of the legislation extending the provisions of the Burton Bill. As a matter of fact, we are not beaten at all, because before consenting to the dropping of the extending resolution, 1 secured President Taft’s personal promise, backed up by his written promise later, to give us a special message on Niagara after the extra session has gotten going. It is our expectation to push now for permanent preservation. I am tired of having a spasm every year or two about it. Details will come to you later, and 1 will be then thankful for some of the effort of the excellent type you always make.Yes, it is possible that I may come west this summer, because I have long wanted to, and because it will be a mighty fine thing to get a chance to see the Yosemite in the company that will be supplied by the Sierra Club. The difficulty is one of securing the time, and I am working on that now.If I do go I hope I may have the pleasure of being with you, and in any case if I come west I will most assuredly get to see you.Yours truly,[Illegible]PresidentJHM/G - ACATo Prof. William Frederic Bade,Berkeley, California06312