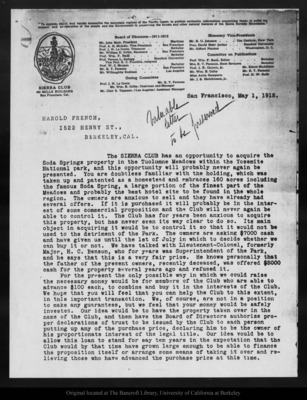 "To explore, enjoy, and render accessible the mountain regions of the Pacific Coast; to publish authentic information concerning them; to enlist the support and co-operation of the people and the Government in preserving the forests and other natural features of Sierra Nevada Mountains."SIERRA CLUB402 MILLS BUILDINGSan Francisco, Cal.Board of Directors-1911-1912Mr. John Muir, President MartinesProf. A. G. McAdie, Vice-President San Francisco.Prof. J. N. Le Conte, Treasurer BerkefeyMr. William E. Colby. Secretary San FranciscoProf. Wm. F. Badè BerkeleyProf. Vernon L. Kellogg Stanford UniversityVice Prof. E. C. Franklin, resignedProf. W. C. Morgan BerkeleyMr. E. T. Parsons San FranciscoMr. Willoughby Rodman Los AngelesOuting CommitteeProf. J. N. Le Conte Mr. E. T. ParsonsMr. Wm. E. Colby. Chairman and ManagerMr. Clair S. Tappaan, (Los Angeles) Assistant ManagerHonorary Vice-PresidentsMr. R. U. Johnson The Century, New YorkPres. David Starr Jordan Stanford UniversityMr. Gifford Pinchot Washington, D. C.Committee on PublicationsProf. Wm. F. Bade. Editor BerkeleyMrs. E. T. Parsons, Book Reviews BerkeleyProf. J. E. Church, Jr. Mr. Elliott McAllisterMr. Wm. E. Colby Mr. E. T. ParsonsMiss Anita Gomperts Prof. H. W. RolfeMr. J. S. Hutchinson, Jr.San Francisco, May 1, 1912.[Illegible]HAROLD FRENCH,1522 HENRY ST.,BERKELEY, CAL.The SIERRA CLUB has an opportunity to acquire the Soda Springs property in the Tuolumne Meadows within the Yosemite National park, and this opportunity will probably never again be presented. You are doubtless familiar with the holding, which was taken up and patented as a homestead and embraces 160 acres including the famous Soda Spring, a large portion of the finest part of the Meadows and probably the best hotel site to be found in the whole region. The owners are anxious to sell and they have already had several offers. If it is purchased it will probably be in the interest of some commercial proposition and the Club will never again be able to control it. The Club has for years been anxious to acquire this property, but has never seen its way clear to do so. Its main object in acquiring it would be to control it so that it would not be used to the detriment of the Park. The owners are asking $7000 cash and have given us until the 1st of July in which to decide whether we can buy it or not. We have talked with Lieutenant-Colonel, formerly Major, H. C. Benson, who for years was Superintendent of the Park, and he says that this is a very fair price. He knows personally that the father of the present owners, recently deceased, was offered $5000 cash for the property several years ago and refused it.For the present the only possible way in which we could raise the necessary money would be for members of the Club who are able to advance J100 each, to combine and buy it in the interests of the Club. We hope that you will feel that you can help the Club to this extent, in this important transaction. We, of course, are not in a position to make any guarantees, but we feel that your money would be safely invested. Our idea would be to have the property taken over in the name of the Club, and then have the Board of Directors authorize proper declarations of trust to be issued by the Club to each person putting up any of the purchase price, declaring him to be the owner of his proportionate interest of the legal title. Our idea would be to allow this loan to stand for say ten years in the expectation that the Club would by that time have grown large enough to be able to finance the proposition itself or arrange some means of taking it over and relieving those who have advanced the purchase price at this time.