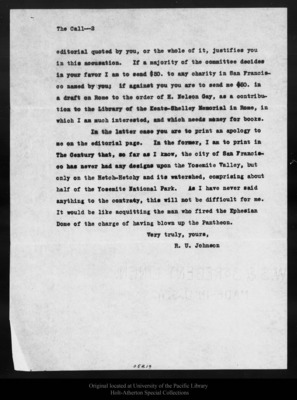 The Call---2editorial quoted by you, or the whole of it, justifies you in this accusation. If a majority of the committee decides in your favor I am to send $50. to any charity in San Francisco named by you; if against you you are to send me $50. in a draft on Rome to the order of H. Nelson Gay, as a contribution to the Library of the Keats-Shelley Memorial in Rome, in which I am much interested, and which needs money for books.In the latter case you are to print an apology to me on the editorial page. In the former, I am to print in The Century that, so far as I know, the city of San Francisco has never had any designs upon the Yosemite Valley, but only on the Hetch-Hetchy and its watershed, comprising about half of the Yosemite National Park. As I have never said anything to the contrary, this will not be difficult for me. It would be like acquitting the man who fired the Ephesian Dome of the charge of having blown up the Pantheon.Very truly, yours,R. U. Johnson05219