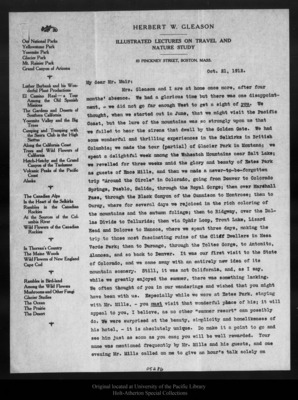 HERBERT W. GLEASONILLUSTRATED LECTURES ON TRAVEL ANDNATURE STUDY83 PINCKNEY STREET. BOSTON. MASS.Our National ParksYellowstone ParkYosemite ParkGlacier ParkMr. Rainier ParkGrand Canyon of ArizonaLuther Burbank and his Wonderful Plant ProductionsEll Camino Real - a Tour Among the Old Spanish MissionsThe Gardens and Deserts of Southern CaliforniaYosemite Valley and the Big TreesCamping and Tramping with the Sierra Club in the High SierrasAlong the California CoastTrees and Wild Flowers of CaliforniaHetch-Hetchy and the Grand Canyon of the TuolumneVolcanic Peaks of the Pacific Coast AlaskaThe Canadian Alps In the Heart of the Selkirks Rambles in the Canadian Rockies At the Sources of the Columbia River Wild Flowers of the Canadian RockiesIn Thoreau's Country The Maine Woods Wild Flowers of New England Cape CodRambles in Bird-land Among the Wild Flowers Mushrooms and Other Fungi Glacier StudiesThe Ocean The PrairieThe DesertOct. 21, 1918. My dear Mr. Muir.Mrs. Gleason and I are at home once more, after four months' absence. We had a glorious time but there was one disappointment, - we did not go tar enough West to get a sight of you. We thought, when we started out in June, that we might visit the Pacific Coast, but the lure of the mountains was so strongly upon us that we failed to hear the sirens that dwell by the Golden Gate. We had some wonderful and thrilling experiences in the [illegible] in British Columbia; we made the tour (partial) of Glacier Park in Montana; we spent a delightful week among the [illegible] Mountains near Salt Lake; we revelled for three weeks amid the glory and beauty of Estes Park as guests of [illegible] Mills, and then we made a never-to-he-forgotten trip "Around the Circle" in Colorado, going from Denver to Colorado Springs, Pueblo, Salina, through the Royal Gorge; then over Marshall Pass, through the Black Canyon of the Gunnison to Montrose; then to Ouray, where for several days we rejoiced in the rich colouring of the mountains and the autumn foliage; then to Ridgeway, over the Dallas Divide to Telluride; then via Other Loop, Trout Lake, Lizard Head and Dolores to Mancos, where we spent three days, making the trip to those most fascinating ruins of the Cliff Dwellers in Mesa Verde Park; then to Durango, through the Tilted Gorge, to Antonito, Alamosa, and so back to Denver. It was our first visit to the State of Colorado, and we came away with an entirely new idea of its mountain scenery. Still, it was not California, and, as I say, while we greatly enjoyed the summer, there was something lacking. We often thought of you in our wanderings and wished that you might have been with us. Especially while we were at Estes Park, staying with Mr. Mills, - you must visit that wonderful place of his; it will appeal to you, I believe, as no other "summer resort" can possibly do. We were surprised at the beauty, 3iinplicity and home likeness of his hotel, - it is absolutely uninjured. Do make it a point to go and see him just as soon as you can; you will be well rewarded. Your name was mentioned frequently by Mr. Mills and his guests, and one evening Mr. Mills called on me to give an hour's talk solely on05287