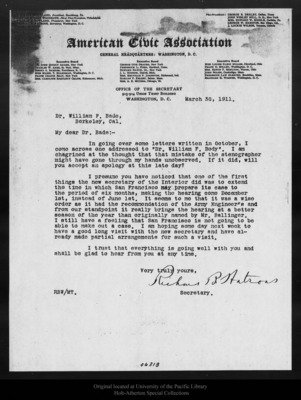 [Illegible]Horace MCFARLAND, President, Harrisburg, Pa.CLINTON ROGERS WOODRUFF, First Vice-President, PhiladelphiaWILLIAM B. HOWLAND, Treasurer, New YorkRICHARD B. WATROUS, Secretary, Washington, D. C.Vice-Presidents: GEORGE B. DEALEY, Dallas, TexasJOHN WESLEY HILL, D. D., New YorkMRS. EDWARD W. BIDDLE, Carlisle, Pa.GEORGE W. MARSTON, San Diego, Cal.J. LOCKIE WILSON, Toronto, CanadaAmerican Civic AssociationGENERAL HEADQUARTERS: WASHINGTON, D. C.Executive BoardDR. JOHN QUINCY ADAMS, New YorkCHARLES W. AMES, St. Paul, Minn.HENRY A. BARKER, Providence, R. I.MISS MABEL T. BOARDMAN, Washington, D. C.FRANK CHAPIN BRAY, New YorkMRS. CAROLINE BARTLETT CRANE, Kalamazoo, Mich.Executive BoardGEORGE OTIS DRAPER, New YorkFREDRICK L. FORD, Hartford, Conn.EDWARD HATCH, JR., New YorkJ. L. HUDSON, Detroit, Mich.MRS. MELVILLE F. JOHNSTON, Richmond, Ind.HARLAN P. KELSEY, Salem, Mass.MRS. A. E. MCCREA, Chicago, ’III.Executive BoardMISS LOUISE KLEIN MILLER, Cleveland, OhioFRANK D. MILLET, Washington, D. C.MRS. EDWIN F. MOULTON, Warren, OhioJOHN NOLEN, Cambridge, Mass.FREDERICK LAW OLMSTED, Brookline, Mass.BRAINARD H. WARNER, Washington, D. C.OFFICE OF THE SECRETARY913 – 914 Union Trust BuildingWASHINGTON, D. C.March 30, 1911.Dr. William F. Bade,Berkeley, Cal.My dear Dr. Bade:-In going over some letters written in October, I come across one addressed to "Dr. William F. Body". I am chagrined at the thought that that mistake of the stenographer might have gone through my hands unobserved. If it did, will you accept an apology at this late day?I presume you have noticed that one of the first things the new secretary of the Interior did was to extend the time in which San Francisco may prepare its case to the period of six months, making the hearing come December 1st, instead of June 1st. It seems to me that it was a wise order as it had the recommendation of the Army Engineer’s and from our standpoint it really brings the hearing at a better season of the year than originally named by Mr. Ballinger. I still have a feeling that San Francisco is not going to be able to make out a case. I am hoping some day next week to have a good long visit with the new secretary and have already made partial arrangements for such a visit.I trust that everything is going well with you and shall be glad to hear from you at any time.Very truly yours,[Illegible]Secretary.RBW/MT.06313