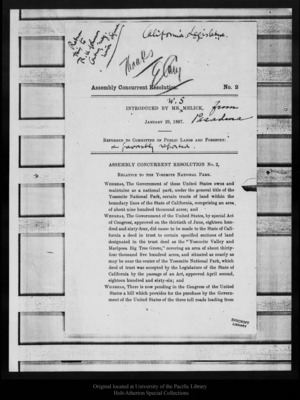 [in margin: Return this to R. U. Johnson Century Mag.Union SquareCalifornia LegislatureThanksE[illegible]Introduced by Mr. W. S. Melick from Pasadena& favorably reported]Assembly Concurrent Resolution.No. 2INTRODUCED BY MR. W. S. MELLICK, from PasadenaJANUARY 29, 1897.REFERRED TO COMMITTEE ON PUBLIC LANDS FORESTRY.ASSEMBLY CONCURRENT RESOLUTION No. 2,RELATIVE TO THE YOSEMITE NATIONAL PARK.WHEREAS, The Government of these United States owns and maintains as a national park, under the general title of the Yosemite National Park, certain tracts of land within the boundary lines of the State of California, comprising an area of about nine hundred thousand acres; andWHEREAS, The Government of the United States, by special Act of Congress, approved on the thirtieth of June, eighteen hundred and sixty-four, did cause to be made to the State of California a deed in trust to certain specified sections of land designated in the trust deed as the "Yosemite Valley and Mariposa Big Tree Grove," covering an area of about thirty-four thousand five hundred acres, and situated as nearly as may be near the center of the Yosemite National Park, which deed of trust was accepted by the Legislature of the State of California by the passage of an Act, approved April second, eighteen hundred and sixty-six; andWHEREAS, There is now pending in the Congress of the United States a bill Which provides for the purchase by the Government of the United States of the three toll roads leading from