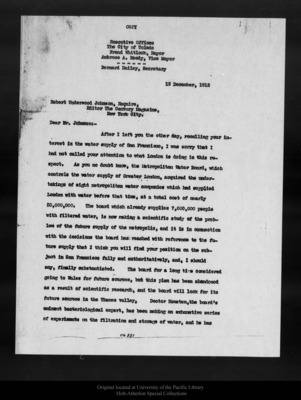 COPYExecutive OfficesThe City of TolodoBrand Whitlock, [illegible]oyorAmbrose A. Moody, Vice MayorBernard Dailoy, Secretary19 December, 1912Robert Underwood Johnson, Esquire,Editor The Century Magazine, New York City.Dear Mr. Johnson:-After I left you the other day, recalling your interest the the water supply of San Francisco, I was sorry that I had not called your attention to what London is doing in this respect. As you no doubt know, the Metropolitan Water Board, which controls the water supply of Greater London, acquired the undertakings of eight metropolitan water companies which had supplied London with water before that time, at a total cost of nearly 50,000,000. The board which already supplies 7,000,000 people with filtered water, is now raking a scientific study of the problem of the future supply of the metropolis, and it is in connection with the decisions the board line reached with reference to the future supply that I think you will find your position on the subject in San Francisco fully said authoritatively, and, I should say, finally substantiated. She board for a long time considered going to Wales for future sources, but this plan has boon abandoned as a result of scientific research, and the board will look for its future sources in the Thomas valley. Doctor Houston, the board's eminent bacteriological expert, has been making on exhaustive series of experiments on the filtration and storage of water, and he has06331