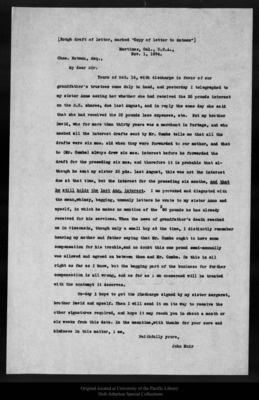 [Rough draft of letter, marked 'Copy of letter to Notman"]Martinez, Cal., U.S.A., NOV. 1, 1894. Chas. Notman, Esq., My dear sir: Yours of Oct. 16, with discharge in favor of our grandfather's trustees came duly to hand, and yesterday I telegraphed to my sister Anne asking her whether she had received the 25 pounds interest on the R.R. shares, due last August, and in reply the same day she said that she had received the 25 pounds less expenses, etc. But my brother David, who for more than thirty years was a merchant in Portage, and who cashed all the interest drafts sent by Mr. Combe tells me that all the drafts were six mos. old when they were forwarded to our mother, and that he (Mr. Combe) always drew six mos. interest before he forwarded the draft for the preceding six mos and therefore it is probable that although he sent my sister 25 pds. last August, this was not the interest due at that time, but the interest for the preceding six months, and that he still holds the last Aug. interest. I am provoked and disgusted withthe mean.whiney, begging, unmanly letters he wrote to my sister Anne andmyself, in which he makes no mention of the 280 pounds he has already received for his services. When the news of grandfather's death reached us in Wisconsin, though only a small boy at the time, I distinctly remember hearing my mother and father saying that Mr. Combe ought to have some compensation for his trouble, and no doubt this one pound semi-annually was allowed and agreed on between them and Mr. Combe. So this is all right as far as I know, but the begging part of the business for further compensation is all wrong, and as far as l am concerned will be treated with the contempt it deserves. To-day I hope to get the Discharge signed by my sister Margaret, brother David and myself. Then I will send it on its way to receive the other signatures required, and hope it may reach you in about a month or six weeks from this date. In the meantime, with thanks for your care and kindness in this matter, I am, Faithfully yours, John Muir