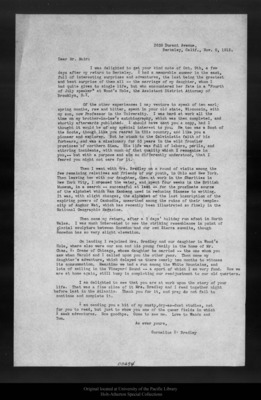 2639 Durant Avenue,Berkeley, Calif., Nov. 5, 1912.Dear Mr. Muir:I was delighted to get your kind note of Oct. 9th, a fewdays after my return to Berkeley. I had a memorable summer in the east,full of interesting surprises and adventures, the last being the greatestand best surprise of them all -- the marriage of my daughter, whomI had quite given to single life, but who encountered her fate in a "Fourthof July speaker" at Wood's Hole, the Assistant District Attorney ofBrooklyn, N.Y.Of the other experiences I may venture to speak of two earlyspring months, raw and bitter, spent in your old state, Wisconsin, withmy son, now Professor in the University. I was hard at work all thetime on my brother-in-law's autobiography, which was then completed, andshortly afterwards published. I should have sent you a copy, had Ithought it would be of any special interest to you. He too was a Scot ofthe Scots, though like you reared in this country, and like you apioneer and explorer. But he stuck to the Calvinistic faith of hisforbears, and was a missionary for 53 years in the wild frontierprovinces of northern Siam. His life was full of labors, perils, andstirring incidents, with much of that quality which I recognize inyou,-- but with a purpose and aim so differently understood, that Ifeared you might not care for it.Then I went with Mrs. Bradley on a round of visits among thefew remaining relatives and friends of our youth, in Ohio and New York.Then leaving her with our daughter, then at work in the Charities inNew York Vity, I crossed the water, and spent four weeks in the BritishMuseum, in a search -- successful at last -- for the proximate sourceof the alphabet which Ram Kamheng used in reducing Siamese to writing.It was, with slight changes, the alphabet of the last inscription of theexpiring powers of Cambodia, unearthed among the ruins of their temple-city of Augkor Wat, which has recently been illustrated so finely in theNational Geographic Magazine.Then came my return, after a 3 days' holiday run afoot in NorthWales. I was much interested to see the striking resemblance in point ofglacial sculpture between Snowdon and our own Sierra summits, thoughSnowdon has so very slight elevation.On landing I rejoined Mrs. Bradley and our daughter in Wood'sHole, where also were our son and his young family in the home of Mr.Chas. R. Crane of Chicago, whose daughter he married -- the one whom yousaw when Harold and I called upon you the other year. Then came mydaughter's adventure, which delayed us there nearly two months to witnessits consummation. Meantime we had a run among the White Mountains, andlots of sailing in the Vineyard Sound -- a sport of which I am very fond. Now we are at home again, still busy in completing our readjustment to our old quarters.I am delighted to see that you are at work upon the story of yourlife. That was a fine slice of it Mrs. Bradley and I read together nightbefore last in the Atlantic. Thank you for it, and pray do not fail to continue and complete it.I am sending you a bit of my musty, dry-as-dust studies, notfor you to read, but just to show you one of the queer fields in which I seek adventures. Now goodbye. Come to see me. Love to Wanda and Tom.As ever yours,Cornelius B- Bradley05294