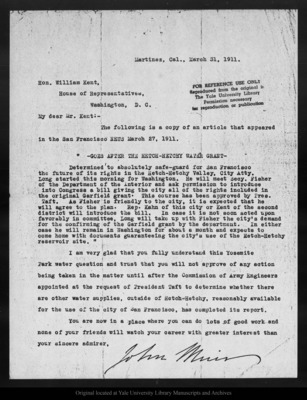 Martinez, Cal., March 31, 1911.Hon. William Kent,House Of Representatives,Washington, D. C.My dear Mr. Kent:-The following is a copy of an article that appeared in the San Francisco NEWS. March 27, 1911."-GOES AFTER THE HETCH-HETCHY WATER GRANT-Determined to absolutely safe-guard for. San Francisco the future of its rights in the Hetch-Hetchy Valley, City Atty. Long started this morning for Washington. He will meet Secy. Fisher of the Department of the interior and ask permission to introduce into Congress a bill giving the city all of the rights included in the original Garfield grant. This course has been approved by Pres. Taft. As Fisher is friendly to the city, it is expected that he will agree to the plan. Rep. Kahn of this city or Kent of the second district will introduce the bill. In case it is not soon acted upon favorably in committee, Long will take up with Fisher the city's demand for the confirming of the Garfield grant by the department. In either case he will remain in Washington for' about a month and expects to come home with documents guaranteeing the city's use of the Hetch-Hetchy reservoir site."I am very glad that you fully understand this Yosemite Park water question and trust that you will not approve of any action being taken in the matter until after the Commission of Army Engineers appointed at the request of President Taft to determine whether there are other water supplies, outside of Hetch-Hetchy, reasonably available for the use of the city of San Francisco, has completed its report.You are now in a place where you can do lots of good work and none of your friends will watch your career with greater interest than your sincere admirer,[illegible]