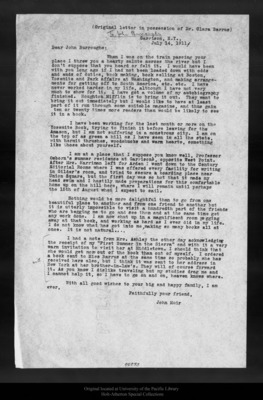 (Original letter in possession of Dr. Clara Barrus)To John BurroughsGarrison, N.Y.,July 14, 1911Dear John Burroughs:When I was on the train passing your place I threw you a hearty salute across the river but I don't suppose that you heard or felt it. I would have been with you long ago if I had not been loaded down with odds and ends of duties, book making, book selling at Boston, Yosemite and Park affairs at Washington, and making arrangements for getting off to South America, etc. etc. I have never worked harder in my life, although I have not very much to show for it. I have got a volume of my autobiography finished. Houghton Mifflin is to bring it out. They want to bring it out immediately but I would like to have at least part of it run through some suitable magazine, and thus gain ten or twenty times more readers than would be likely to see it in a book.I have been working for the last month or more on the Yosemite Book, trying to finish it before leaving for the Amazon, but I am not suffering in a monstrous city. I am on the top of as green a hill as I have seen in all the state, with hermit thrushes, woodchucks and warn hearts, something like those about yourself.I am at a place that I suppose you know well, Professor Osborn's summer residence at Garrisons, opposite West Point. After Mrs. Harriman left for Arden I went down to the Century Editorial Rooms where I was offered every facility for writing in Gilder's room, and tried to secure a boarding place near Union Square, but the first day was so hot that it made my head swim and I hastily made preparations for this comfortable home up on the hill here, where I will remain until perhaps the 15th of August when I expect to sail.Nothing would be more delightful than to go from one beautiful place to another and from one friend to another but it is utterly impossible to visit a hundredth part of the friends who are begging me to go and see them and at the same time get any work done. am now shut up in a magnificent room pegging away at that book, and working as hard as I ever did in my life. I do not know what has got into me, making so many books all at once. It is not natural..... With all good wishes to your big and happy family, I amever,Faithfully your friend, John Muir05073