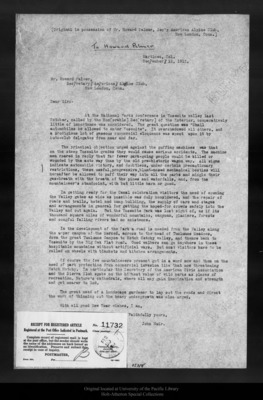 [Original in possession of Mr. Howard Palmer, Sec'y American Alpine Club, New London, Conn.]To Howard PalmerMartinez, Cal. December 12, 1912.Mr. Howard Palmer,Secretary American Aline Club, New London, Conn.Dear Sir:-At the National Parks conference in Yosemite valley last October, called by the Hon[orable] Sec[retary] of the Interior, comparatively little of importance was considered. The great question was "Shall automobiles be allowed to enter Yosemite", It overshadowed all others, and a prodigious lot of gaseous commercial eloquence was spent upon it by Auto-club delegates from near and far.The principal objection urged against the puffing machines was that on the steep Yosemite grades they would cause serious accidents. The machine men roared in reply that far fewer park-going people would be killed or wounded by the auto way than by the old prehistoric wagon way. All signs indicate automobile victory, and doubtless, under certain precautionary, restrictions, these useful, progressive,blunt-nosed mechanical beetles will hereafter be allowed to puff their way into all the parks and mingle their gas-breath with the breath of the pines and waterfalls, and, from the mountaineer's standpoint, with but little harm or good.In getting ready for the Canal celebration visitors the need of opening the Valley gates as wide as possible was duly considered, and the repair of roads and trails, hotel and camp building, the supply of cars and stages and arrangements in general for getting the hoped-for crowds safely into the Valley and out again. But the Yosemite Park was lost sight of, as if its thousand square miles of wonderful mountains, canyons, glaciers, forests and songful falling rivers had no existence.In the development of the Park a road is needed from the Valley along the upper canyon of the Merced, across to the head of Tuolumne Meadows, down the great Tuolumne Canyon to Hetch Hetchy valley, and thence back to Yosemite by the Big Oak Flat road. Good walkers can go anywhere in these hospitable mountains without artificial ways. But most visitors have to be rolled on wheels with blankets and kitchen arrangements.Of course the few mountaineers present got in a word now and then on the need of park protection from commercial invasion like that now threatening Hetch Hetchy. In particular the Secretary of the American Civic Association and the Sierra Club spoke on the highest value of wild parks as places of recreation, Nature's cathedrals, where all may gain inspiration and strength and get nearer to God.The great need of a landscape gardener to lay out the roads and direct the work of thinning out the heavy undergrowth was also urged.With all good New Year wishes, I am,Faithfully yours,John MuirRECEIPT FOR REGISTERED ARTICLERegistered at the Post Office Indicated in Postmark.Complete record of registered mail is kept at the post office, but the sender should write the name of the addressee on back hereof as an identification. Preserve and submit this receipt case of inquiry.POSTMASTER,perForm 3806.No. 11732Class postagePostmark clearly,showingdate and office.05-685205318