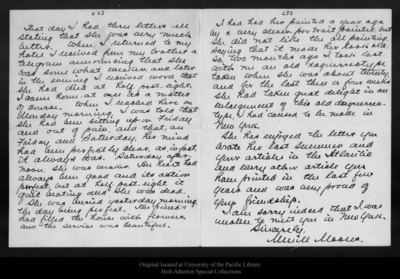 [2]That day I had three letters all stating that she was very much better. When I returned to my hotel I received from my brother a telegram announcing that she was somewhat weaker and later in the evening I received word that she had died at half-past-eight. I came home at once as a matter of course. When I reached here on Monday morning, I was told tht she had been sitting up on Friday and out of pain, and that on Friday and Saturday, her mind had been perfectly clear, and in fact, it always was. Saturday afternoon, she was weaker. Her heart had always been good and its action perfect. But at half-past-eight, it quit beating and she was dead.She was buried yesterday morning, the day being perfect. Her friends had filled the house with flowers, and the service was beautiful.[3]I had had her painted a year ago by a very [clever?] portrait painter, but she did not like the oil painting, saying that it made her look old. So two months ago I took east with me an old daguerreotype taken when she was about twenty, and for the last three or four weeks she had taken great delight in an enlargement of this old daguerreotype, I had caused to be made in New York.She has enjoyed the letter you wrote her last summer and your articles in the Atlantic and every other article your have printed in the last few years and was very proud of your friendship.I am sorry indeed that I was unable to meet you in New York.Sincerely,Merill Moores