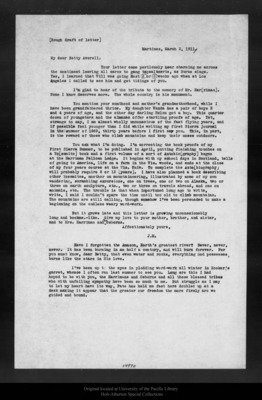 Martinez, March 2, 1911/My dear Betty Averell: Your letter came perilously hear charming me across the continent leaving all cares to gang tapsalteerie, as Burns sings. Yes, I learned that Will was going East (2)or(3)weeks ago when at Los Angeles I called to see him and get tidings of you. I'm glad to hear of the tribute to the memory of Mr. Har[riman]. None I know deserves more. The whole country is his monument. You mention your aunthood and mother's grandmotherhood, while I have been grandfathered thrice. My daughter Wanda has a pair of boys 2 and 4 years of age, and the other day darling Helen got a boy. This quarter dozen of youngsters and the almanac offer startling proofs of age. Yet, strange to say, I am almost wholly unconscious of the fast flying years, and if possible feel younger than I did while writing my first Sierra journal in the summer of 1869, thirty years before I first saw you. This, in part, is the reward of those who climb mountains and keep their noses outdoors. You ask what I'm doing. I'm correcting the book proofs of my First Sierra Summer, to be published in April, putting finishing touches on a Yo[semite] book and a first volume of a sort of Autobio[graphy] begun at the Harriman Pelican Lodge. It begins with my school days in Scotland, tells of going to America, life on a farm in the Wis. woods, and ends at the close of my four years course at the Wis. Univ. To complete the Auto[biography] will probably require 8 or 12 [years]. I have also planned a book describing other Yosemites, another on mountaineering, illustrated by some of my own wandering, scrambling excursions, one on trees, one or two on Alaska, two or three on earth sculpture, etc., two or three on travels abroad, and one on animals, etc. The trouble is that when importuned long ago to write, write, I said I couldn't spare the time until too old to climb mountains. The mountains are still calling, though somehow I've been persuaded to make a beginning on the endless weary word-work. But it grows late and this letter is growing unconscionably long and bookms.-like. Give my love to your mother, brother, and sister, and to Mrs. Harriman and$Osborns.Affectionately yours,J.M. Have I forgotten the Amazon, Earth's greatest river? Never, never, never. It has been burning in me half a century, and will burn forever. For you must know, dear Betty, that even water and rocks, everything God possesses, burns like the stars in His love. I've been up to the eyes in plodding word-work all winter in Hooker’s garret, whence I often ran last summer to see you. Long ere this I had hoped to be with you, the Harrimans and Osborns and all those blessed tribas who with unfailing sympathy have been so much to me. But struggle as I may to let my heart have its way, Fate has held me fast here doubled up at a desk making it appear that the greater our freedom the more firmly are we guided and bound. 04970 [Rough draft of letter]