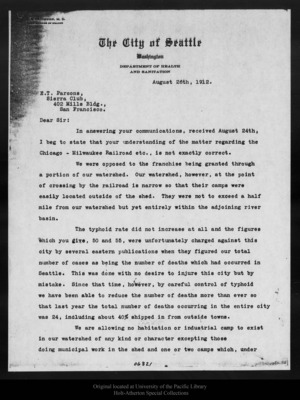 The City of SeattleWashintonDEPARTMENT OF HEALTHAND SANITTIONAugust 26th, 1912.E.T. Parsons,Sierra Club,402 Mills Bldg.,San Francisco.Dear Sir:In answering your communications, received August 24th, I beg to state that your understanding of the matter regarding the Chicago - Milwaukee Railroad etc., is not exactly correct.We were opposed to the franchise being granted through a portion of our watershed. Our watershed, however, at the point of crossing by the railroad is narrow so that their camps were easily located outside of the shed. They were not to exceed a half mile from our watershed but yet entirely within the adjoining river basin.The typhoid rate did not increase at all and the figures which you give, 50 and 55, were unfortunately charged against this city by several eastern publications when they figured our total number of cases as being the number of deaths which had occurred in Seattle. This was done with no desire to injure this city but by mistake. Since that time, however, by careful control of typhoid we have been able to reduce the number of deaths more than ever so that last year the total number of deaths occurring in the entire city was 24, including about 40% shipped in from outside towns.We are allowing no habitation or industrial camp to exist in our watershed of any kind or character excepting those doing municipal work in the shed and one or two camps which, under06321