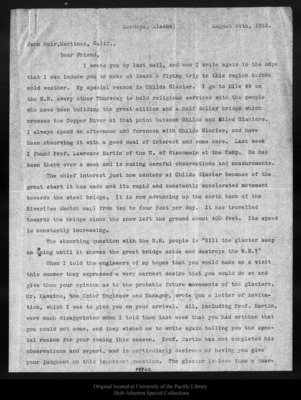 Cordova, Alaska; August 24th, 1910.John Muir, Martinez, Calif., Dear Friend,I wrote you by last mail, and now I write again in the hope that I can induce you to make at least a flying trip to this region before cold weather. My special reason is Childs Glacier. I go to Mile 49 on the R.R. every other Thursday to hold religious services with the people who have been building the great million and a half dollar bridge which crosses the Copper River at that point between Childs and Miles Glaciers. I always spend an afternoon and forenoon with Childs Glacier, and have been observing it with a good deal of interest and some care. Last week I found Prof. Lawrence Martin of the U. of Wisconsin at the Camp. He has been there over a week and is making careful observations and measurements.The chief interest just now centers at Childs Glacier because of the great start it has made and its rapid and constantly accelerated movement towards the steel bridge. It is now advancing up the north bank of the River(See sketch map) from two to four feet per day. It has travelled towards the bridge since the snow left the ground about 400 feet. Its speed is constantly increasing.The absorbing question with the R.R. people is "Will the glacier keep on coming until it shoves the great bridge aside and destroys the R.R.?"When I told the engineers of my hopes that you would make me a visit this summer they expressed a very earnest desire that you would do so and give them your opinion as to the probable future movements of the glaciers. Mr. Hawkins, the Chief Engineer and Manager, wrote you a letter of invitation, which I was to give you on your arrival. All, including Prof. Martin, were much disappointed when I told them last week that you had written that you could not come, and they wished me to write again telling you the special reason for your coming this season. Prof. Martin has not completed his observations and report, and is particularly desirous of having you give your judgment on this important question. The glacier is less than a quar-04862