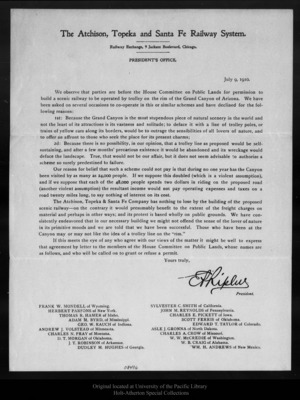 The Atchison, Topeka and Santa Fe Railway System.Railway Exchange, 9 Jackson Boulevard, Chicago.PRESIDENT'S OFFICE.July 9, 1910.We observe that parties are before the House Committee on Public Lands for permission to build a scenic railway to be operated by trolley on the rim of the Grand Canyon of Arizona. We have been asked on several occasions to co-operate in this or similar schemes and have declined for the following reasons:1st: Because the Grand Canyon is the most stupendous piece of natural scenery in the world and not the least of its attractions is its vastness and solitude; to deface it with a line of trolley poles, or trains of yellow cars along its borders, would be to outrage the sensibilities of all lovers of nature, and to offer an affront to those who seek the place for its present charms;2d: Because there is no possibility, in our opinion, that a trolley line as proposed would be self-sustaining, and after a few months' precarious existence it would be abandoned and its wreckage would deface the landscape. True, that would not be our affair, but it does not seem advisable to authorize a scheme so surely predestined to failure.Our reason for belief that such a scheme could not pay is that during no one year has the Canyon been visited by as many as 24,000 people. If we suppose this doubled (which is a violent assumption), and if we suppose that each of the 48,000 people spends two dollars in riding on the proposed road (another violent assumption) the resultant income would not pay operating expenses and taxes on a road twenty miles long, to say nothing of interest on its cost.The Atchison, Topeka & Santa Fe Company has nothing to lose by the building of the proposed scenic railway-on the contrary it would presumably benefit to the extent of the freight charges on material and perhaps in other ways; and its protest is based wholly on public grounds. We have consistently endeavored that in our necessary building we might not offend the sense of the lover of nature in its primitive moods and we are told that we have been successful. Those who have been at the Canyon may or may not like the idea of a trolley line on the "rim."If this meets the eye of any who agree with our views of the matter it might be well to express that agreement by letter to the members of the House Committee on Public Lands, whose names are as follows, and who will be called on to grant or refuse a permit.Yours truly,[illegible]President.FRANK W. MONDELL of Wyoming.HERBERT PARSONS of New York.THOMAS R. HAMER of Idaho.ADAM M. BYRD, of Mississippi.GEO. W. RAUCH of Indiana.ANDREW J. VOLSTEAD of Minnesota.CHARLES N. PRAY of Montana.D. T. MORGAN of Oklahoma.J. T. ROBINSON of Arkansas.DUDLEY M. HUGHES of Georgia.SYLVESTER C. SMITH of California.JOHN M. REYNOLDS of Pennsylvania.CHARLES E. PICKETT of Iowa.SCOTT FERRIS of Oklahoma.EDWARD T. TAYLOR of Colorado.ASLE J. GRONNA of North Dakota.CHARLES A. CROW of Missouri.W. W. McCREDIE of Washington.W. B. CRAIG of Alabama.WM. H. ANDREWS of New Mexico.08496