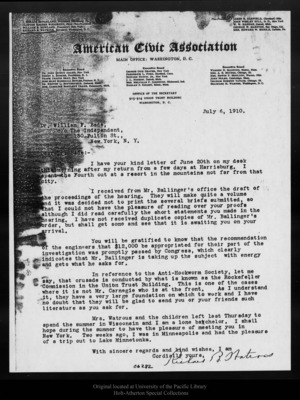 J. HORACE MCFARLAND, President, Harrisburg, Pa.CLINTON ROGERS WOODRUFF, First Vice-President, PhiladelphiaWILLIAM B. HOWLAND, Treasurer, New YorkRICHARD B. WATROUS, Secretary, Washington, D. C.Vice-President: JAMES R. GARFIELD, Cleveland, OhioJOHN WESLEY HILL, D. D., New YorkW. W. HANNAN. Detroit, Mich.GEORGE W. MARSTON. San Diego, Cal.MRS. EDWARD W. BIDDLE, Carlisle, Pa.American Civic AssociationMAIN OFFICE: WASHINGTON, D. C.Executive BoardDR. JOHN QUINCY ADAMS, New YorkHENRY A.BARKER, Providence, R. I.FRANK CHAPIN BRAY, New YorkMISS MARY MARSHALL BUTLER, Yonkers, N. Y.DR. KENYON L. BUTTERFIELD, Amherst, Mass.MRS. CAROLINA BARTLETT CRANE, Kalananco, Mich.Executive BoardGEORGE OTIS DRAPER, New YorkFREDERICK L. FORD, Hartford, Conn.EDWARD HATCH, JR., New YorkJ. L. HUDSON, Detroit, Mich.MRS. MELVILLE F. JOHNSTON, Richmond, Ind.HARLAN P. KELSEY, Salem, Mass.Executive BoardWARREN H. MANNING, Boston, Mass.MRS. A. H. McCREA, Chicago, III.MRS. EDWIN F. MOULTON, Warren, OhioJOHN NOLEN, Cambridge, Mass.GRAHAM ROMEYN TAYLOR, Chicago, III.BRAINARD H. WARNER, Washington, D. C.OFFICE OF THE SECRETARY913-914 UNION TRUST BUILDINGWASHINGTON, D. C.July 6, 1910.Dr. William F. Bade,c/o The Independent,130 Fulton St.,New York, N. Y.Dear Dr. Bade:-I have your kind letter of June 20th on my this morning after my return from a few days at Harrisburg. I spent the Fourth out at a resort in the mountains not far from that city.I received from Mr. Ballinger's office the draft of ihe proceedings of the hearing. They will make quite a volume and it was decided not to print the several briefs submitted, so that I could not have the pleasure of reading over your proofs although I did read carefully the short statements you made in the hearing. I have not received duplicate copies of Mr. Ballinger's order, but shall get some and see that it is awaiting you on your arrival.You will be gratified to know that the recommendation the engineers that $12,000 be appropriated for their part of the investigation was promptly passed by Congress, which clearly indicates that Mr. Ballinger is taking up the subject with energy and gets what he asks for.In reference to the Anti-Hookworm Society, let me say, that crusade is conducted by what is known as the Rockefeller Commission in the Union Trust Building. This is one of the cases where it is not Mr. Carnegie who is at the front. As I understand it, they have a very large foundation on which to work and I have no doubt that they will be glad to send you or your friends such literature as you ask for.Mrs. Watrous and the children left last Thursday to spend the summer in Wisconsin and I am a lone bachelor. I shall hope during the summer to have the pleasure of meeting you in New York. Two weeks ago, I was in Minneapolis and had the pleasure of a trip out to Lake Minnetonka.With sincere regards and kind wishes, I amCordially yours,[illegible]06282