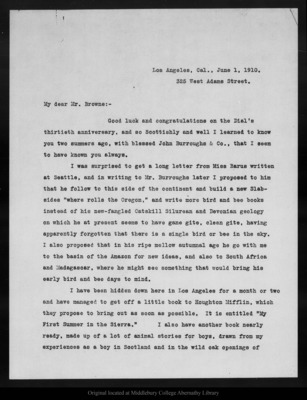 Los Angeles, Cal., June 1, 1910.325 West Adams Street.My dear Mr. Browne:-Good luck and congratulations on the Dial's thirtieth anniversary, and so Scottishly and well I learned to know you two summers ago, with blessed John Burroughs & Co., that I seem to have known you always.I was surprised to get a long letter from Miss Barus written at Seattle, and in writing to Mr. Burroughs later I proposed to him that he follow to this side of the continent and build a new Slab-sides "where rolls the Oregon," and write more bird and bee books instead of his new-fangled Catskill Silurean and Devonian geology on which he at present seems to have gane gite, clean gite, having apparently forgotten that there is a single bird or bee in the sky. I also proposed that in his ripe mellow autumnal age he go with me to the basin of the Amazon for new ideas, and also to South Africa and Madagascar, where he might see something that would bring his early bird and bee days to mind.I have been hidden down here in Los Angeles for a month or two and have managed to get off a little book to Houghton Mifflin, which they propose to bring out as soon as possible. It is entitled "My First Summer in the Sierra." I also have another book nearly ready, made up of a lot of animal stories for boys, drawn from my experiences as a boy in Scotland and in the wild oak openings of

Middlebury College Abernathy Library. Please contact this institution directly to obtain copies of the images or permission to publish or use them beyond educational purposes.