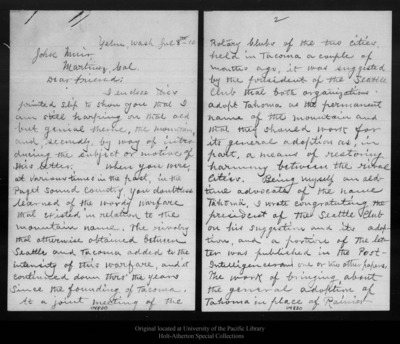 Yelm, Wash, Jul 8th - 10John Muir,Martinez, Cal.Dear Friend:I enclose this printed slip to show you that I am still harping on that old but genial theme, the mountain, and, seemly, by way of introducing the subject or motive of this letter. When you were, at various times in the past, in the Puget Sound Country, you doubtless learned of the wordy warfare that existed in relation to the mountain name. The rivalry that otherwise obtained between Seattle and Tacoma added to the intensity of this warfare, and it continued down thro' the years since the founding of Tacoma.At a joint meeting of the048302Rotary Clubs of the two cities, held in Tacoma a couple of months ago, it was suggested by the president of the Seattle Club that both organizations adopt Tahoma as the permanent name of the mountain and that they should work for its general adoption as, in part, a means of restoring harmony between the rival cities. Being myself an old-time advocate of the name Tahoma [diacritic], I wrote congratuting the president of the Seattle Club on his suggestion and its adoption, and a portion of the letter was published in the Post-Intelligencer and one or two other papers. The work of bringing about the general adoption of Tahoma in place of Rainier04830