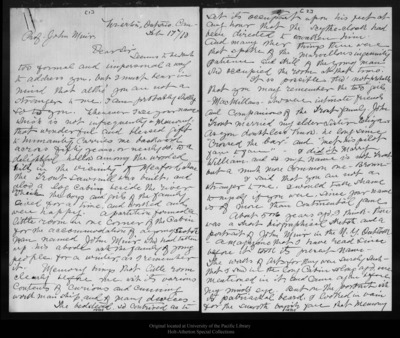 [1]Wiarton, Ontario, Can -Feb 17th/10Prof. John Muir,Dear SirSeems to be much too formal and impersonal a way to address you, but I much bear in mind that altho' you are not a stranger to me, I am probably wholly so to you. Whenever I see your name - which is not infrequently, memory, that wonderful and blessed gift to humanity carries me backward across fifty years, or nearly so, to a delightful hollow among the wooded hills in the vicinity of Meaford, where the "Trout sawmill was built, and also a log cabin beside the river where the boys and girls of the family lived for a time, and worked and were happy. A partition formed a little room in one corner of the cabin for the accommodation of a young Scotch man named John Muir who had taken up his abode with the family of young people, for a winter, as I remember it. Memory brings that little room clearly before me. with its various contents of curious and cunning workmanship, and of many devices.The bedstead, so contrived as to 04705 [2]set its occupant upon his feet at any hour that the scythe-[illegible] had been directed to awaken him. And many other things there were not spare of the marvellous ingenuity patience and skill of the young man who occupied the room at that time.It is possible tho' not probable that you may remember the two girls, - MacMillans - who were intimate friends and companions of the Trout family. John Trout married my elder sister - Eliza - as you doubtless knew. he long since "crossed the bar"- and "met his pilot face to face" - I did 'nt marry William, and so my name is not Trout, but a much more common one - Brown-I said that you are not a stranger to me. I would take shame to myself if you were, since your name is of more than continental fame.About 5 or 6 years ago,- I think - there was a short biographical sketch and a portrait of John Muir in the N. Y. Outlook - a magazine that I have read since before it took its present name - The works of Art- for they were surely such - that I saw in the long cabin so long ago, were mentioned in it, and came again before my mind's eye. But on the portrait, with its patriarchal beard, I looked in vain for the smooth boyish face that memory04705