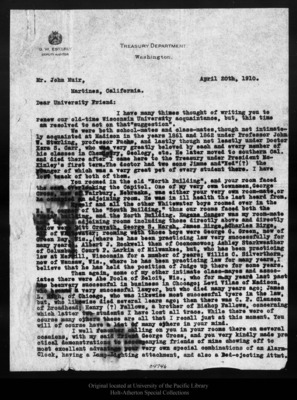 G. W. ESTERLYDEPUTY AUDITORTREASURY DEPARTMENTWashington.April 20th, 1910.Mr. John Muir,Martinez, California.Dear University Friend:I have many thimes thought of writing you to renew our old-time Wisconsin University acquaintance, but, this time am resolved to act on that "suggestion".We were both school-mates and class-mates, though net intimately acquainted at Madison in the years 1861 and 1862 under Professor John W. Starling, professor Fuchs, and lastly though not leastly under Doctor Eara S. Carr, who was very greatly beloved by each and every member of his classes in Chemistry, Geology, etc. He later moved to southern Cal. and died there after I came here to the Treasury under President Mc. Kinley's first term. The doctor had two sons Jimme and "Ned"(?) the younger of which was a very great pet of every student there. I have lost track of both of them.You roomed in the old "North Building", and your room faced the cash overlooking the Capitol. One of my very own townsmen, George Cross, now of Fairbury, Nebraska, was either your very own room-mate, or he occupied an adjoining room. He wan in ill health the last heard from.Myself and all the other Whitewater boys roomed over in the N. W. corner of the "South Building," thus our rooms faced both the "Main" building, and the North Building. Eugene Conger was my room-mate and in the adjoining rooms including those directly above and directly below were Pitt Cravath, George S. Marsh, James Birge, & Charles Birge, all of Whitewater; rooming with those boys were George G. Green, now of Green Bay, [illegible]is. (where he has been practicing law very successfully for many years. Albert J. Rockwell then of Oconomowoc; Ashley Starkweather of Columbus; Court P. Larkin of Milwaukee, but, who has been practicing, law at Merrill, Wisconsin for a number of years; Willis C. Silverthorn, now of Wausaw, Wis., where he has been practicing law for many years, I believe that he has held the position of Judge up there for some years.Then again, soms of my other intimate class-mayes and associates there were Abe Poole of Beloit, Wis., who for many years last past has beenvery successful in business in Chocago; Levi Vilas of Madison, who became a very successful lawyer, but who died many years ago; James L. High, of Chicago, who was likewise most successful tyere in the law, but, who likewise died several lears ago; then there was C. P. Clauson of Broadhead; Henry (?) Fallows, a brother of Bishop Fallows, concerning which latter two students I have lost all trace. While there were of course many others these are all that I recall just at this moment. You will of course have a list of many [illegible]hers in your mind.I well remember calling on you in your rooms there on several ocasions, with my said friend George Cross, and you very kindly made practical demonstrations to accompanying friends of mine showing off to most excellent advantage your very own special combinations of an Alarm-Clock, having a Lamp-Lighting attachment, and also a Bed-ejecting Attmt.04746