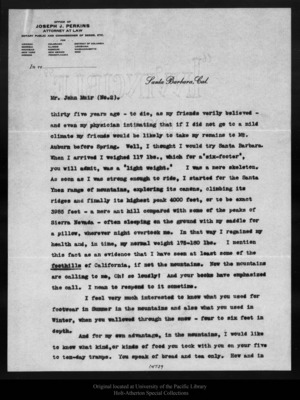 OFFICE OF JOSEPH J. PERKINSATTORNEY AT LAWNOTARY PUBLIC AND COMMISSIONER OF DEEDS, ETC. . . for . .ARIZONAGEORGIAMICHIGANNEW YORKOREGONCOLORADOILLINOISMISSOURINEW MEXICOPENNSYLVANIADISTRICT OF COLUMBIALOUISIANAMASSACHUYSETTSOHIOIn re...........Panta Barbara, bal. Mr.John Muir (No.2).thirty five years ago - to die, as my friends verily believed -and even my physician intimating that if I did net go to a mild climate my friends would be likely to take My remains to Mt. Auburn before Spring. Well, I thought I would try Santa Barbara. When I arrived I weighed 117 lbs., which for a"six-footer", you will admit, was a "light weight." I was a mere skeleton. As soon as I was strong enough to ride, I started for the Santa Ynez range of mountains, exploring its canons, climbing its ridges and finally its highest peak 4000 feet, or to be exact 3985 feet - a mere ant hill compared with some of the peaks of Sierra Nevada - often sleeping on the ground with my saddle for a pillow, wherever night overtook me. In that way I regained my health and, in time, my normal weight 175-180 lbs. I mention this fact as an evidence that I have seen at least some of the foothills of California, if not the mountains. Now the mountains are calling to me, Oh! so loudly! And your books have emphasized the call. I mean to respond to it sometime.I feel very much interested to know what you used for footwear in Summer in the mountains and also what you used in Winter, when you wallowed through the snow - four to six feet in depth.And for my own advantage, in the mountains, I would like to know what kind, or kinds of food you took with you on your five to ten-day tramps. You speak of bread and tea only. How and in04739