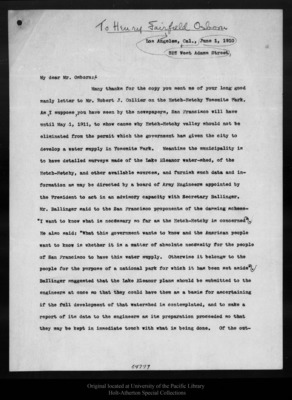 Los Angeles, Cal., June 1, 1910325 West Adams Street,My dear Mr. Osborn:-Many thanks for the copy you sent me of your long good manly letter to Mr. Robert J. Collier on the Hetch-Hetchy Yosemite Park. As, I suppose, you have seen by the newspapers, San Francisco will have until May 1, 1911, to show cause why Hetch-Hetchy valley should not be eliminated from the permit which the government has given the city to develop a water supply in Yosemite Park. Meantime the municipality is to have detailed surveys made of the Lake Eleanor water-shed, of the Hetch-Hetchy, and other available sources, and furnish such data and information as may be directed by a board of Army Engineers appointed by the President to act in an advisory capacity with Secretary Ballinger. Mr. Ballinger said to the San Francisco proponents of the damming scheme-"I want to know what is necessary so far as the Hetch-Hetchy is concerned". He also said: "What this government wants to know and the American people want to know is whether it is a matter of absolute necessity for the people of San Francisco to have this water supply. Otherwise it belongs to the people for the purpose of a national park for which it has been set aside". Ballinger suggested that the Lake Eleanor plans should be submitted to the engineers at once so that they could have them as a basis for ascertaining if the full development of that watershed is contemplated, and to make a report of its data to the engineers as its preparation proceeded so that they may be kept in immediate touch with what is being done. Of the out-04777