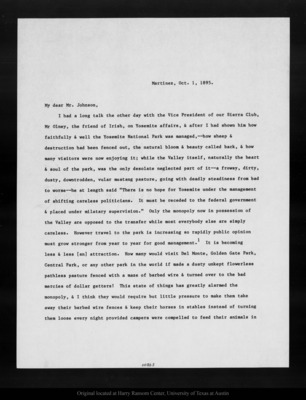 Martinez, Oct. 1, 1895.My dear Mr. Johnson,I had a long talk the other day with the Vice President of our Sierra Club, Mr Olney, the friend of Irish, on Yosemite affairs, & after I had shown him how faithfully & well the Yosemite National Park was managed,--how sheep & destruction had been fenced out, the natural bloom & beauty called back, & how many visitors were now enjoying it; while the Valley itself, naturally the heart & soul of the park, was the only desolate neglected part of it--a frowsy, dirty, dusty, downtrodden, vular mustang pasture, going with deadly steadiness from bad to worse--he at length said “There is no hope for Yosemite under the management of shifting careless politicians. It must be receded to the federal government & placed under militarily supervision.” Only the monopoly now in possession of the Valley are opposed to the transfer while most everybody else are simply careless. However travel to the park is increasing so rapidly public opinion must grow stronger from year to year for good management. 1 It is becoming less & less [an] attraction. How many would visit Del Monte, Golden Gate Park, Central Park, or any other park in the world if made a dusty unkept flowerless pathless pasture fenced with a maze of barbed wire & turned over to the bad mercies of dollar getters! This state of things has greatly alarmed the monopoly, & I think they would require but little pressure to make them take away their barbed wire fences & keep their horses in stables instead of turning them loose every night provided campers were compelled to feed their animals in00863