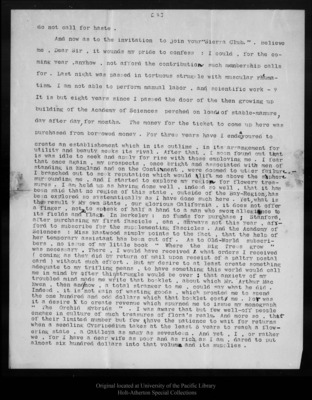 do not call for haste.And now as to the invitation to join your"Sierra Club.". Believe me, Dear Sir, it wounds my pride to confess: I could, for the coming year, anyhow, not afford the contribution such membership calls for. Last night was passed in tortuous struggle with muscular rheumatism. I am not able to perform manual labor, and. scientific work -? It is but eight years since I passed the door of the then growing up building of the Academy of Sciences perched on load of stable-manure day after day, for months. The money for the ticket to come up here was purchased from borrowed money. For three years have I endeavoured tocreate an establishement which in its outline, in its arrangement for utility and. beauty seeks its rival. After that, I soon found out that is was idle to seek and apply for rise with those employing me. I fear that once again, my prospects, once bright and associated with men of standing in England and on the Continent, were doomed to utter failure. I branched out to seek reputation which would lift me above the sphere-sursounding me, and I started to explore my region for flowery treasures. I am held up as having done well, indeed so well, that it has been said that no region of this state, outside of the Bay-Region,has be en explored so systematically as I have done such here. Yet, what is the result? My own State, our glorious California, it does not offer a finger, not to speak of half a hand to a man who swore allegiance to its fields and its flags. In Berkeley: no funds for purchase; Stanford, after purchasing my first fascicle, can, anyways not this year, afford to subscribe for the supplementing fascicles. And the Academy of Sciences: Miss Eastwood, simply points to the fact, that the help of her temporary assistant has been cut off. As to Old-World subscribers, no issue of my little book "Where the Big Trees grow" was necessary, There, I would have received what orders I received (coming as they did by return of mail upon receipt of a paltry postal card) without such effort. But my desire to at least create something adequate to my trifling means, to have something this world would call me in mind by after this struggle would be over: that anxiety of my troubled mind made me write that booklet, about which Mr. Arthur Mac Ewen, then and now, a total stranger to me, could pay what he did. Indeed, it is not tain of wasting goods, which promted me to spend the one hundred and odd dollars which that booklet costs me. Nor was it a, desire to create revenue which spurned me to issue my monograph "The Orchid Hybrids". I was aware that but few well-off people engage in culture of such treasures of flora's realm. And more so, their of their limited number but few have the patience to wait for returns when a seedling Cypripedium takes at the least 5 years to reach a flowering state, a Cattleya as many as seventeen. And yet, I, or rather we, for I have a dear wife as poor and as rich as I am, dared to put almost six hundred dollars into that volume and its supplies.