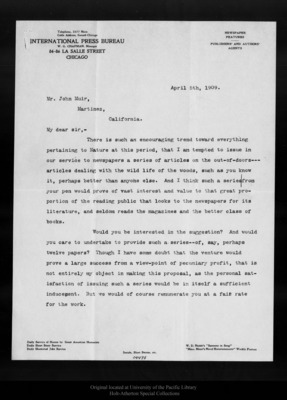 Telephone, 2377 MainCable Address, Gerard-ChicagoINTERNATIONAL PRESS BUREAUW. G. CHAPMAN, Manager84-86 LA SALLE STREETCHICAGONEWSPAPERFEATURESPUBLISHERS' AND AUTHORS'AGENTSApril 5th, 1909.Mr. John Muir,Martinez,California.My dear sir,-There is such an encouraging trend toward everything pertaining to Nature at this period, that I am tempted to issue in our service to newspapers a series of articles on the out-of-doors---articles dealing with the wild life of the woods, such as you know it, perhaps better than anyone else. And I think such a series from your pen would prove of vast interest and value to that great proportion of the reading public that looks to the newspapers for its literature, and seldom reads the magazines and the better class of books.Would you be interested in the suggestion? And would you care to undertake to provide such a series--of, say, perhaps twelve papers? Though I have some doubt that the venture would prove a large success from a view-point of pecuniary profit, that is not entirely my object in making this proposal, as the personal satisfaction of issuing such a series would be in itself a sufficient inducement. But we would of course remunerate you at a fait rate for the work.Daily Service of Humor by Great American HumoristsDaily Short Story ServiceDaily Illustrated Joke ServiceSerials, Short Stories, etc.W. D. Nesbit's "Sermons in Song""Mme. Merri's Novel Entertainments" Weekly Feature04475