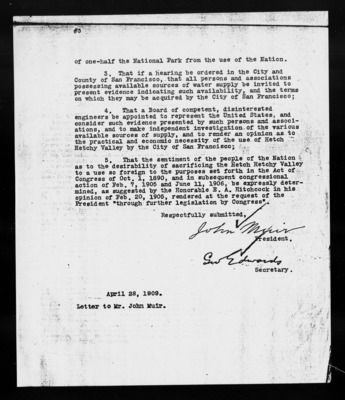 of one-half the National Park from the use of the Nation.3. That if a hearing be ordered in the City and County of San Francisco, that all persons andassociations possessing available sources of water supply be invited to present evidence indicating such availability, and the terms on which they may be acquired by the City of San Francisco;4. That a Board of competent, disinterested engineers be appointed to represent the United States, and consider such evidence presented by such persons and associations, and to make independent investigation. of the various available sources of supply, and to render an opinion as to the practical and economic necessity of the use of Hetch Hetchy Valley by the City of San Francisco;5. That the sentiment of the people of the Nation as to the desirability of sacrificing the Hetch Hetchy Valley to a use so foreign to the purposes set forth in the Act of Congress of Oct. 1, 1890, and in subsequent congressional action of Feb. 7, 1905 and June 11, 1906, be expressly determined, as suggested by the Honorable E. A. Hitchcock in his opinion of Feb. 20, 1905, rendered at the request of the President "through further legislation by Congress"Respectfully submitted,[illegible]President.[illegible]Secretary.April 28, 1909.Letter to Mr. John Muir.