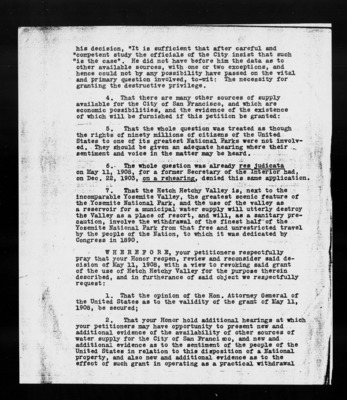 his decision, "It is sufficient that after careful and "competent study the officials of the City insist that such "is the case". He did not have before him the data as to other available sources, with one or two exceptions, and hence could not by any possibility have passed on the vital and primary question involved, to-wit: The necessity for granting the destructive privilege.4. That there are many other sources of supply available for the City of San Francisco, and which are economic possibilities, and the evidence of the existence of which will be furnished if this petition be granted:5. That the whole question was treated as though the rights of ninety millions of citizens of the United States to one of its greatest National Parks were not involved. They should be given an adequate hearing where their sentiment and voice in the matter may be heard.6. The whole question was already res.judicata on May 11, 1908, for a former Secretary of the Interior had,on Dec. 22, 1903, on a rehearing, denied this same application.7. That the Hetch Hetchy Valley is, next to the incomparable Yosemite Valley, the greatest scenic feature of the Yosemite National Park, and the use of the valley as a reservoir for a municipal water supply will utterly destroy the Valley as a place of resort, and will, as a sanitary precaution, involve the withdrawal of the finest half of the Yosemite National Park from that free and unrestricted travel by the people of the Nation, to which it was dedicated by Congress in 1890.WHEREFORE, your petitioners respectfully pray that your Honor reopen, review and reconsider said decision of May 11, 1908, with a view to revoking said grant of the use of Hetch Hetchy Valley for the purpose therein described, and in furtherance of said object we respectfully request:1. That the opinion of the Hon. Attorney General of the United States as to the validity of the grant of May 11, 1908, be secured;2. That your Honor hold additional hearings at which your petitioners may have opportunity to present new and additional evidence of the availability of other sources of water supply for the City of San Francisco, and new and additional evidence as to the sentiment of the people of the United States in relation to this disposition of a National property, and also new and additional evidence as to the effect of such grant in operating as a practical withdrawal