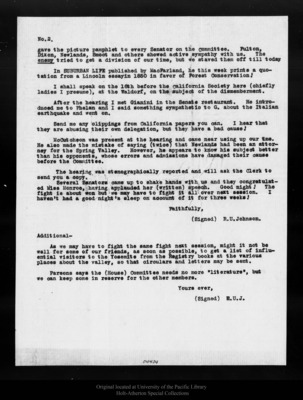 No. 2gave the picture pamphlet to every Senator on the committee. Fulton, Dixon, Newlands, Smoot and others showed active sympathy with us. The enemy tried to get a division of our time, but we staved them off till today.In SUBURBAN LIFE published by MacFarland, he this week prints a quotation from a Lincoln essayin 1850 in favor of Forest Conservation!I shall speak on the 16th before the California Society here (chiefly ladies I presume), at the Waldorf, on the subject of the dismemberment.After the hearing I met Gianini in the Senate restaurant. He introduced me to Phelan and I said something sympathetic to G. about the Italian earthquake and went on.Send me any clippings from California papers you can. I hear that they are abusing their own delegation, but they have a bad cause!MoCutoheon was present at the hearing and came near using up our time. He also made the mistake of saying (twice) that Newlands had been an attorney for the Spring Valley. However, he appears to know his subject better than his opponents, whose errors and admissions have damaged their cause before the Committee.The hearing was stenographically reported and will ask the Clerk to send you a copy.Several Senators came up to shake hands with us and they congratulated Miss Monroe, having applauded her (written) speech. Good night! The fight is about won but we may have to fight it all over next session. I haven't had a good night's sleep on account of it for three weeks!Faithfully,(Signed) R. U. Johnson.Additional-As we may have to fight the same fight next session, might it not be well for some of our friends, as soon as possible, to get a list of influential visitors to the Yosemite from the Registry books at the various places about the valley, so that circulars and letters may be sent.Parsons says the (House) Committee needs no more "literature", but we can keep some in reserve for the other members.Tours ever,(Signed) H.U.J.