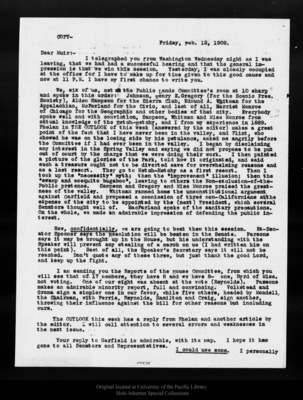 COPY-Friday, Feb. 12, 1909.Dear Muir:-I telegraphed you from Washington Wednesday night as I was leaving, that we had had a successful hearing and that the general impression is that we win this session. Yesterday, I was closely occupied at the office for I have to make up for time given to this good cause and now at 11 P.M. I have my first chance to write you.We, six of us, met at the Public Lands Committee's room at 10 sharp and spoke in this order: Johnson, Henry E.Gregory (for the Scenic Pres. Society), Alden Sampson for the Sierra Club, Edmund A. Whitman for the Appalachian, McFarland for the Civic, and last of all, Harriet Monroe of Chicago for the Geographic and other bodies of that city. Everybody spoke well and with conviction, Sampson, Whitman and Miss Monroe from actual knowledge of the Hetch-Hetchy, and I from my experience in 1889. Phelan in THE OUTLOOK of this week (answered by the editor) makes a great point of the fact that I have never been in the valley, and Flint, who showed he was on the losing side by his petulance, asked me angrily before the Committee if I had ever been in the valley. I began by disclaiming any interest in the Spring Valley and saying we did not propose to be put out of court by the charge that we were doing their work. I then painted a picture of the glories of the Park, told how it originated, and said such a treasure ought not to be diverted save for overwhelming reasons and as a last resort. They go to Hetch-Hetchy as a first resort. Then I took up the "necessity" myth; then the "improvement" illusion; then the "swamp and mosquito bugaboo", leaving to others the Non-exclusion-of-the-Public pretense. Sampson and Gregory and Miss Monroe praised the greatness of the valley. Whitman rammed home the unconstitutional argument against Garfield and proposed a commission of three non-Californians at the expense of the city to be appointed by the (next) President, which several Senators thought well of. MacFarland spoke of the sanitary precautions. On the whole, we made an admirable impression of defending the public interest.Now, confidentially, we are going to beat them this session. Ex-Senator Spooner says the Resolution will be beaten in the Senate. Parsons says it may be brought up in the House, but his understanding with the Speaker will prevent any stealing of a march on us (I had written him on this point). Best of all, the Speaker's Secretary says it will not be reached. Don't quote any of these three, but just thank the good Lord, and keep up the fight.I am sending you the Reports of the House Committee, from which you will see that of 17 members, they have 8 and we have 8- one, Byrd of Miss, not voting. One of our eight was absent at the vote (Reynolds). Parsons makes an admirable minority report, full and convincing. Vclkstead and Groma sign a simpler one in our favor, while five others, headed by Mondell, the Chairman, with Ferris, Reynolds, Hamilton and Craig, sign another, throwing their Influence against the bill for other reasons but including ours.The OUTLOOK this week has a reply from Phelan and another article by the editor. I will call attention to several errors and weaknesses in the next issue.Your reply to Garfield is admirable, with its map. I hope it has gone to all Senators and Representatives.I could use some. I personally