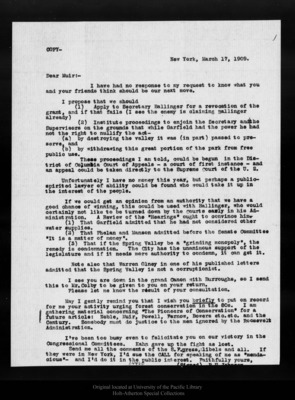 COPY-New York, March 17, 1909.Dear Muir:- I have had no response to my request to know what you and your friends think should be our next move.I propose that we should(1) Apply to Secretary Ballinger for a revocation of the grant, and if that falls (I see the enemy is claiming Ballinger already) (2) Institute proceedings to enjoin the Secretary and the Supervisors on the grounds that while Garfield had the power he bad not the right to nullify the act-(a) by destroying the valley it was (in part) passed to pre-serve, and(b) by withdrawing this great portion of the park from free public use. These proceedings I am told, could be begun in the District of Columbia Court of Appeals - a court of first instance - and an appeal could be taken directly to the Supreme Court of the U. S. Unfortunately I have no money this year, but perhaps a public-spirited lawyer of ability could be found who would take it up in the interest of the people. If we could get an opinion from an authority that we have a good chance of winning, this could be used with Ballinger, who would certainly not like to be turned down by the courts early in his Administration. A Review of the "Hearings" ought to convince him-(1) That Garfield admitted that he had not considered other water supplies. (2) That Phelan and Manson admitted before the Senate Committee"It is a matter of money". (3) That if the Spring Valley be a "grinding monopoly", the remedy is condemnation. The City has the unanimous support of the legislature and if it needs more authority to condemn, it can get it. Note also that Warren Olney in one of his published letters admitted that the Spring Valley is not a corruptionist. I see you are down in the Grand Canon with Burroughs, so I send this to Mr. Colby to be given to you on your return. Please let me know the result of your consultation. May I gently remind you that I wish you briefly to put on record for me your activity urging forest conservation in the 80s. I am gathering material concerning "The Pioneers of Conservation" for a future article: Noble, Muir, Powell, Fernow, Bowers etc. etc. and the Century. Somebody must do justice to the men ignored by the Roosevelt Administration. I've been too busy even to felicitate you on our victory in the Congressional Committees. Kahn gave up the fight as lost. Send me all the comments of the S. F. press, libels and all. If they were in New York, I'd sue the CALL for speaking of me as "mendacious"- and I'd do it in the public interest. Faithfully yours, (Signed)