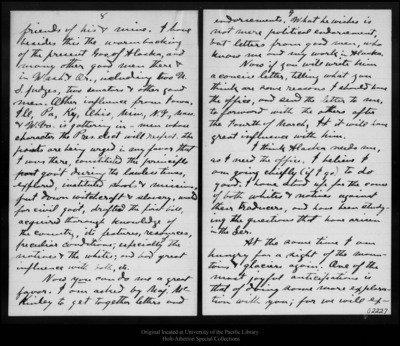 8friends of his & mine. I have besides this the warm backing of the present Gov. of Alaska, and many other good men there & in Wash. & Or., including two U. S. judges, two senators & other grand men. Other influence from Iowa, Ill, Pa, Ky, Ohio, Min., N.Y., Mass. & W.VA. is gathering in--men whose character the Pres. elect will respect. The points are being urged in any favor that I was there, constituted the principle gov't during the lawless times, explored, insituted schools & missions, put down witchcraft & slavery, worked for civil gov't, drafted the first bill, acquired thorough knowledge of the country, its features, resources, peculiar conditions; expecially the natives & the whites; and had great influence with both, etc.Now you can do me a great favor. I am asked by Maj. McKinley to get together letters and9endorsements. What he wishes is not mere political endorsement, but letters from good men, who know me and my work in Alaska.Now if you will write him a concise letter, telling what you think are some reasons I should have the office, and send the letter to me, to forward with the others after the Fourth of March, it will have great influence with him.I think Alaska needs me, as I need the office. I believe I am going chiefly (if I go) to do good. I have stood up for the cause of both whites & natives against their traducers, and have been studying the questions that have arisen in the Ter.At the same time I am hungry for a sight of the mountains & glaciers again. One of the most joyful anticipations is that of doing some more exploration with you; for we will ex-02227