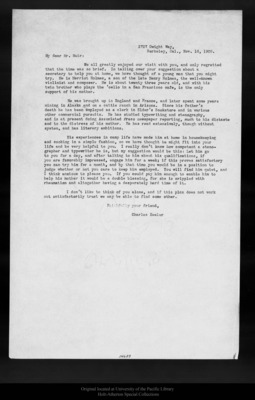 2727 Dwight Way,Berkeley, Cal., Nov. 16, 1909.My dear Mr. Muir:We all greatly enjoyed our visit with you, and only regretted that the time was so brief. In taliing over your suggestion about a secretary to help you at home, we have thought of a young man that you might try. He is Herriot Holmes, a son of the late Henry Holmes, the well-known violinist and composer. He is about twenty three years old, and with his twin brother who plays the 'cello in a San Francisco cafe, is the only support of his mother.He was brought up in England and France, and later spent some years mining in Alaska and on a cattle ranch in Arizona, Since his father's death he has been employed as a clerk in Elder's Bookstore and in various other commercial pursuits. He has studied typewriting and stenography, and is at present doing Associated Press newspaper reporting, much to his distaste and to the distress of his mother. He has read extensively, though without system, and has literary ambitions.His experiences in camp life have made him at home in housekeeping and cooking in a simple fashion, so we have thought he might fit into your life and be very helpful to you. I really don't know how competent a stenographer and typewriter he is, but my suggestion would be this: Let him go to you for a day, and after talking to him about his qualifications, if you are favorably impressed, engage him for a week; if this proves satisfactory you can try him for a month, and by that time you would be in a position to judge whether or not you care to keep him employed. You will find him quiet, and I think anxious to please you. If you could pay him enough to enable him to help his mother it would be a double blessing, for she is crippled with rheumatism and altogether having a desperately hard time of it.I don't like to think of you alone, and if this plan does not work out satisfactorily trust we may be able to find some other.Faithfully your friend,Charles Keeler04633