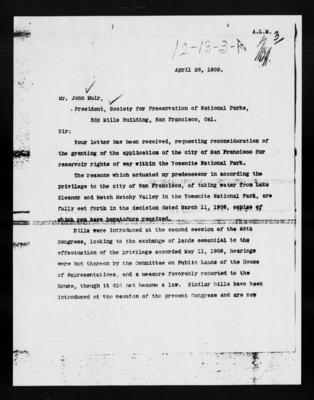 A.L.M.[illegible]April 28, 1909.Mr. John Muir,President Society for Preservation of National Parks, 302 Mills Building, San Francisco, Cal.Sir:Your letter has been received, requesting reconsideration of the granting of the application of the city of San Francisco for reservoir rights of way within the Yosemite National Park.The reasons which actuated my predecessor in according the privilege to the city of San Francisco, of taking water from Lake Eleanor and Hetch Hetchy Valley in the Yosemite National Park, are fully set forth in the decision dated March 11, 1908, copies of which you have heretofore received.Bills were introduced at the second session of the 60th Congress, looking to the exchange of lands essential to the effectuation of the privilege accorded May 11, 1908, hearings were had thereon by the Committee on Public Lands of the House of Representatives, and a measure favorably reported to the House, though it did not become a law. Similar bills have been introduced at the session of the present Congress and are now