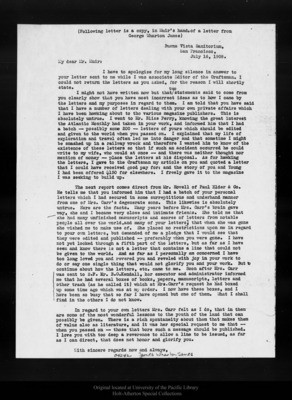 (Following letter is a copy, in Muir's hand, of a letter from George Wharton James)Buena Vista Sanitorium, San Francisco,July 16, 1908.My dear Mr. Muir: I have to apologize for my long silence in answer to your letter sent to me while I was associate Editor of the Craftsman. I could not return the letters as you asked, for the reason I will shortly state.I might not have written now hut that two statements said to come from you clearly show that you have most incorrect ideas as to how I came by the letters and my purposes in regard to them. I am told that you have said that I have a number of letters dealing with, your own private affairs which I have been hawking about to the various magazine publishers. This is absolutely untrue. I went to Mr. Bliss Perry, knowing the great intrest the Atlantic Monthly had taken in your work, and informed him that I had a batch - possibly some 200 - letters of yours which should be edited and given to the world when you passed on. I explained that my life of exploration and travel often led me into danger and that sometime I might be smashed up in a railway wreck and therefore I wanted him to know of the existence of these letters so that if such an accident occurred he could write to my wife, who would at once - and there was neither thought nor mention of money - place the letters at his disposal. As for hawking the letters, I gave to the Craftsman my article on you and quoted a letter that I could have received good pay for: and the story of you and Young I had been offered $l50 for elsewhere. I freely gave it to the magazine I was seeking to build up.The next report comes direct from Mr. Howell of Paul Elder & Co. He tells me that you informed him that I had a batch of your personal letters which I had secured in some surreptitious and underhand manner from one of Mrs. Carr's degenerate sons. This likewise is absolutely untrue. Here are the facts. Many years before Mrs. Carr's brain gave way, she and I became very close and intimate friends. She told me that she had many unfinished manuscripts and scores of letters from notable people all over the world,and many of your letters] that when she was gone she wished me to make use of. She placed no restrictions upon me in regard to your own letters, but demanded of me a pledge that I would see that they were edited and published - preferably when you were gone. I have not yet looked through a fifth part of the letters, but as far as I have seen and know there is not a letter that contains a line that could not be given to the world. And as far as I personally am concerned I have too long loved you and revered you and reveled with joy in your work to do or say one single thing that would not glorify you and your work. But to continue about how the letters, etc. came to me. Soon after Mrs. Carr was sent to S.F. Mr. B.O.Kendall, her executor and administrator informed me that he had several boxes of books, papers, manuscripts, letters and other trash (as he called it) which at Mrs.Carr's request he had boxed up some time ago which was at my order. I now have these boxes, and I have been so busy that so far I have opened but one of them. What I shall find in the others I do not know.In regard to your own letters Mrs. Carr felt as I do, that in them are some of the most wonderful lessons to the youth of the land that can possibly be given. There is a rich spontaneity about them that makes them of value also as literature, and it was her special request to me that - when you passed on - those that bore such a message should be published. I love you with too deep a reverence to allow a line to be issued, as far as I can direct, that does not honor and glorify you.With sincere regards now and always,04242[illegible]