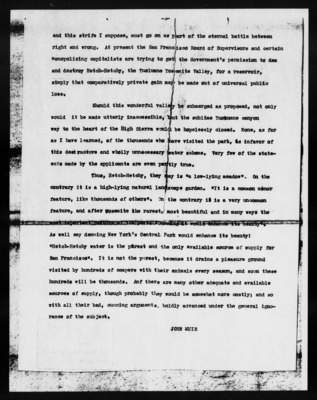 2and this strife I suppose, must go on as part of the eternal battle between right and wrong. At present the San Francisco Board of Supervisors and certain monopolising capitalists are trying to get the Government's permission to dam and destroy Hetch-Hetchy, tho Tuelumne Yosemite Valley, for a reservoir, simply that comparatively private gain may be made out of universal public loss.Should this wonderful valley be submerged as proposed, not only would it be made utterly inaccessible, but the sublime Tuolumne canyon way to the heart of the High Sierra would be hopelessly closed. None, as far as I have learned. of the thousands who have visited the park. as infavor of this destructuve and wholly unnecessary water scheme. Very few of the state-ents made by tha applicants are even partly true.Thus, Hetch-Hetchy, they may is "a low-lying meadow". On the contrary it is a high-lying natural landscape garden. "It is a common minor feature, like thousands of others". On the contrary it is a very uncommon feature, and after Yosemite the rarest, most beautiful and in many ways the [illegible]As well say damming New York's Central Park would enhance its beauty! "Hetch-Hetchy water is the purest and the only available source of supply for San Francisco".It is not the purest, because it drains a pleasure ground visited by hundreds of campers with their animals every season, and soon these hundreds will be thousands. Anf there are many other adequate and available sources of supply, though probably they would be somewhat more costly; and so with all their bad, cunning arguments, boldly advanced under the general ignorance of the subject.JOHN MUIR